ON THE COVER:
Reheated
news 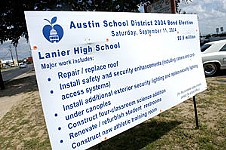 Make Us Some Propositions

The 2004 bond process had several stages

New Schools Across the District

The locations and controversies for the proposed new schools

A Bumpy Landing at Mueller?

The latest on the battle to keep the stream clean

The "Father of Robin Hood" takes the "West Orange-Cove" stand

More eyes than usual upon a city parking contract

A raw deal on health insurance stays sweet for Aetna

How radical! A station that plays several different kinds of music!

March to update the women's suffrage movement for modern times

If that's all there is, my friends, then let's keep driving … or worse

It's election season in Texas. Are there indictments in the air?

The contest or the hot sauce? Commercial Bottler category winners tell how it's done.

The Contest, the Judges

Who tickets what in Austin

The Concretes, Riot on an Empty Street, One Plus One is One

To Tulsa and Back
screens

Last Saturday found Tobe Hooper in absentia and John C. Reilly quite the opposite

The rise of the networks' fall

Benji: Off the Leash!

Bush's so-called brain is Karl Rove, whose mastery of dirty tricks deserves clearer scrutiny than it gets in this documentary.

Aussie import is sweet but as emotionally ethereal as a Splenda meringue.

Help us, Lucifer. This prequel is cursed.

Watching the latest from the insanely prolific Takashi Miike is akin to having some very bad acid slipped in your drink.

If Douglas Sirk had made martial arts movies they probably would have looked something like Zhang Yimou's stunning new opus.

There's a reason why this FBI agent who's chasing a serial killer has constant headaches: He's in the middle of a murky movie that mixes arch style with police procedural.
arts & culture

L.B. Deyo and Buzz Moran's Dionysium puts the fun back in cogitation

Getting to know the new adjunct curator at AMOA

The Good News at Rockdale

Theatre is helping to heal the community of Rockdale, and theatre artists with Austin ties are playing a part

Clowns picket Physical Plant, Mills takes the prize in Montreal, Steakley mixes up some 'Tuna' in Louisville, and Salvage Vanguard wants you to join their party

In 'A Traves de mis manos / Through My Hands,' painter Esteban Machado Diaz offers us a gallery of playfully impossible landscapes reminiscent of Escher

The Sword in the Stone

Scottish Rite Children's Theatre debut production, 'The Sword in the Stone,' makes you feel like you're right in the middle of a fairy tale
columns

The real truth about (Hurricane) Charley, and the charmed life of President Bush

What's the latest in fall fashion? Only your Style Avatar knows for sure.

Does the law require that rental application fees are nonrefundable?

What makes certain individuals more attractive to mosquitoes than others, and what can we do to repel them?