ON THE COVER:
The Usual Suspects
news

The first year of the Will Wynn era closes to very mixed reviews, as Austinites wonder whether the city leadership is floundering.

Wynn's World: The Picks and Pans

Grading city government under the Will Wynn administration

ACC Goes Back to the Drawing Board

A Load of 'Special Waste'

Dozens apply for thankless jobs on the new district board

Bound For the Board?

A Who's Who of applicants for the hospital district board

The governor orders another investigation of human-services agency

Clean Air in Texas? Not!

The economy has 'improved' … so why aren't you smiling? And meet Macedonia, our 'anti-terror' ally.

The governor's gamble on casinos may yet come up snake-eyes

The drama of the Chez Zee menu

Digesting Austin's food news for you!

Tracing the history of Austin hip-hop through its vinyl

"From the End of Your Leash"

To the Five Boroughs

By the Grace of God, Leave No Ashes, Contraband, Fulton Hill, 'Til the Living End, Satin Black, Box of Scorpions

Karen Bernstein's 'Are the Kids Alright?' examines the state of mental health care in Texas

'Before Sunset' asks the hard questions

Inspirational documentary is about Americans with true grit working in a land where seldom is heard a discouraging word.

Anchorman: The Legend of Ron Burgundy

Will Ferrell's Anchorman needs more work behind the scenes.

Linklater summons up an affair to remember.

Despite the contributions of Robert Redford, Helen Mirren, and Willem Dafoe, The Clearing is a psychological thriller sans suspense.

In this cinematic retelling Arthur and his men are trained to be a warrior SWAT team for the Roman Empire. 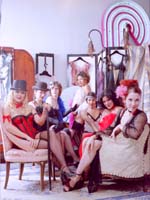 It's the Changing of the Bard, from Dietz to Swanson, and Tina Marsh plays it cool for CO2. Artists talk techniques, and teens tell you where to find Good Love.

Quinton's Back at Zach

One to Grow On

It's a happy first birthday for Arts on Real

Left-leaning criticism is not the same as political extremism

Stephen 'courts' the United folks and their roadkill, shares his dishy Internet source bookmarks, and finds out which red and which white go with huntin' and fishin'… monarchs and gossip and bears, oh my!

Can nonprofits raise money with a raffle?

'The Texas Post Office Murals: Art for the People' bridges the gap between coffeetable art book and travel guide

Three cheers for the underdogs!