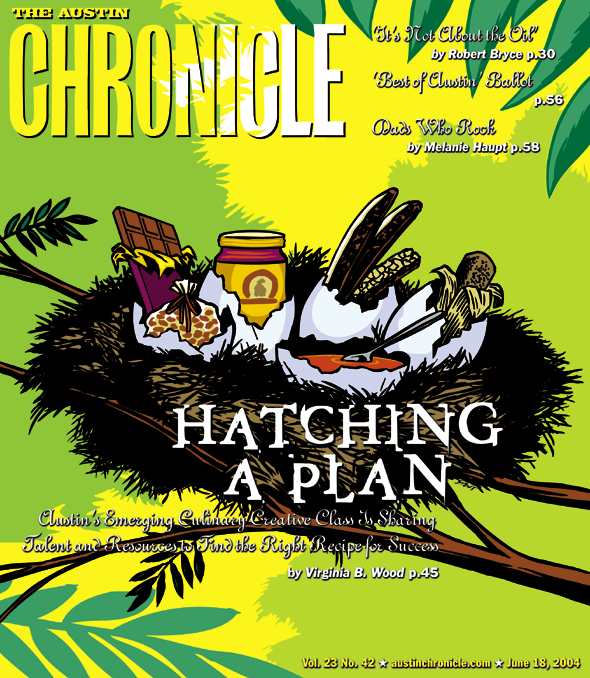 ON THE COVER:
Hatching a Plan
news 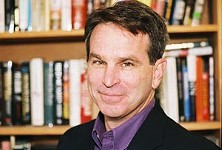 'It All Leads Back to Texas'

The Second Iraq War and the cronies of state capitalism

The city's draft budget is on the table, and the cuts just keep on coming

A recent Supreme Court decision may undercut both verdicts

Spending It All in One Place: The Unknown Texas Quarters

Austin @ Large: Mueller in the Middle

Whatever disasters City Hall hath wrought, the old airport isn't one of them

We may get another special session, but school funding remains a poor bet

Oh, the indignity! Royalty gets the commoner treatment, sort of; and 'offshoring' gets a new name 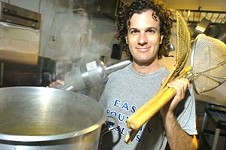 Making music in mecca for parents and children alike

O beautiful, for Prince, Ray Charles, and 100 pounds of weed

Baby, Don't You Tear My Clothes Could Paris Hilton or Jonathan Antin teach Dubya a thing or two about how to work it?

Jackie Chan finally emerges as plausible English-language star in this international romp that's as light as a hot-air balloon.

In this goofy and lowbrow Vince Vaughn/Ben Stiller comedy, the good guys are lovable losers and the bad guys have frosted feathered hair and unitards with inflatable codpieces.

The U.S. premiere of this self-reflexive horror film from England is presented in Austin by Fangoria magazine.

A long-absent father returns to his family in this prize-winning Russian drama, and for his two young sons the unexplained reason for his return is as mysterious as his absence. In Search of the Wild Art

It's Edinburgh for 'Bolero,' the Big Apple for 'Flawed' and 'St. Enid,' and AMOA for PR guy David Wyatt

The kid art in Creative Research Laboratory's "Now and Tomorrow" exhibit is more than notebook doodling; it's inventive, arresting self-expression

Kathryn Walat's Know Dog is a tale of loneliness and longing, but an authentic howl of desperation is missing from Salvage Vanguard Theater's world premiere
columns

Stephen's date gets hit on, and, remarkably, there's no word of bloodshed. Read all about it.

There's something familiar about the Japanese weasel

Are there natural alternatives to the prescription cholesterol-lowering medications?

Deciding whether to file suit in small claims court

Is there anything better on a lazy summer day than lounging around in a cool pool watching the world go by?

News and jokes from Euro2004