ON THE COVER:
Here Come the Transporters
news 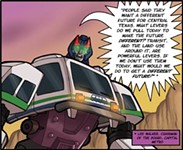 In the endless Central Texas transportation wars, the lions and the lambs look for ways to make peace

Questionable Ethics at the Ethics Commission?

Parsing the TAKS at AISD

The Austin ISD TAKS scores mirror the state averages, for better and worse

'Tomorrow' Not Far Away?

Nearly 165,000 of our friends and neighbors are guests of the Lone Star State

Too Little, Late at 'Times'

Mayor Will Wynn visits European capitals – will anybody in Austin notice he's missing?

There are lies, damned lies, and statistics … and then there's the TAKS test

George W. Bush goes easy on the rich … and Donald Trump needs it! 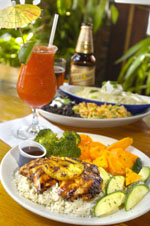 The cafes Paradise and Pecan Street: still plating after all these years

A Grand Don't Come for Free

You Are the Quarry

The Pretty Toney Album, Tical 0: The Prequel, No Said Date

Jonathan Demme on 'The Agronomist'

Our Man in Cannes

Cinemania implodes at the last minute; plus: South by Southwest moving to Dallas?!

If they launch it, viewers will come

Harry Potter and the Prisoner of Azkaban

The boy wizard rides again and this outing proves zippier and spookier than the previous two.

The Saddest Music in the World

All in the Timing

Physical Plant Theater's first Garden Party raised more than $8,000, Ann Hume Wilson has been appointed associate director of the Blanton Museum of Art, Blue Lapis Light is exhibiting – and auctioning off – bras and breastplates for angels, and the city unveils a new mural at the Pan Am / A.B. Cantu Recreation Center

Crimes of the Heart

Onstage Theatre Company's production of Crimes of the Heart focuses on the relationships among Beth Henley's small-town Southerners and describes them simply, truly, and beautifully

We celebrate the opening of Jonathan Demme's complex and moving The Agronomist and cherish the sensibilities of horror-film art director Robert Burns, who passed away this week

What did the drag queen teach Stephen, and when and where will he get Wilde?

I may be allergic to sulfites – is this common, and what should I do now?

Small disputes, should I hire a lawyer?

World Cup qualifying has begun, and Texas is hosting