ON THE COVER:
Lioness in Winter
news

Profiles of the contestants

Profiles of the contestants

Austin Firefighters bring collective bargaining to the May 15 ballot

Hospital district proponents refuse to count their chickens just yet

A national conference comes to Austin to examine wrongful convictions

What was the real source of the Barton Springs pollution?

Austin's police learn to give hugs

An update on George Bush's War against American Liberties

Go and Sin No More

The real sin is failure to fund public education

Time to play Medicare Gotcha; and, if the Pentagon fears global warming, why doesn't George W.?

For the first time in 50 years, Austin is without a Holiday House restaurant. Plus: Event-o-Rama. 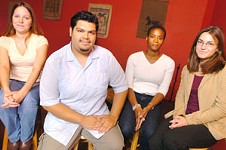 UT filmmakers get Guggenheims, spots at Cannes, and more. Plus: SXSW is never over.

The mean month of May

Biopic of the only person to have ever won golf's grand slam.

Israeli family drama reveals that turmoil begins at home, not at the country's borders.

Godsend is an unresurrectable muddle about human cloning.

The first law of attraction is sexual chemistry – something this movie is completely lacking.

Mayor of the Sunset Strip

Wilbur Wants to Kill Himself

Where the Art Is

The Eastside is home to more than 70 artists and studios, and they're opening their doors to you on May 1

Artist Jim Hodges invites light into his exhibition at the Austin Museum of Art and through his unusual concepts and craft, he builds a show as illuminating as it is incandescent

The trick in staging Romeo and Juliet has ever been keeping the suspense in the second half that the first half never really needs, and the Austin Shakespeare Festival almost manages it
columns

War is how civilizations make love, so we should be careful of the partners we choose

Stephen sits on a panel and judges others … twice, and Club DeVille's spring you-know-what

The Dalai Lama was a swinger.

A relative passed away recently and the duty has fallen to me to wind up her affairs. She left a will. Where do I start? Can I do this without a lawyer?

With the addition of Monica's 701 Georgetown's culinary reputation keeps improving

Are the tannins in my tea bad for me?

So much soccer, so little time.