ON THE COVER:
Working-Class Hero
news

The city budget report looks a wee bit rosier, but with plenty of thorns

The Show With No Home

The current antsiness among broadcasters nails a local favorite

Breaking stories from Austin and beyond

Tyco stays the course, and the USDA rolls over for Big Beef Elegance Out of Town

We know they can do breakfast. But what about lunch? 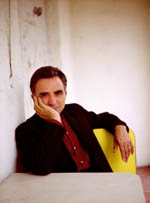 Guests of the Nation

A Five and Dime Ship, Iron Kite, Concentric, Explosions in the Sky, Calla

A Five and Dime Ship, The Light in the Fog, Concentric, The Long Spring, Calla

On set with 'Shades of Life,' the multicultural soap-opera access show giving minority actors a shot at exposure

Watching Outside the Box

How many industries do you know of that can capitalize on dated inventory while ringing up sales for "failed" merchandise?

A package of some of the most recent animated and live-action Oscar nominees.

Witnessing a mob hit can be a real drag.

As the turmoil of WWII engulfs Hungary, a Budapest eatery becomes home to a love triangle.

As Theatre for Children Matures

In 40 years of nurturing young people's love for the stage, Coleman Jennings has helped a profession develop, too

Oh, What a Lovely War Protest!

The Accidental Activist tells how the Lysistrata Project became a global anti-war phenomenon, from the perspective of Kathryn Blume, who co-founded and lived it

City Council adopts new guidelines for the Cultural Arts Funding Program, Michelle Schumann shoots off for a Canadian piano competition, and some 'palpable hits' to get your sweet William for Shakespeare's birthday

It Ain't Nothin' but the Blues

It Ain't Nothin' but the Blues is a blues primer covering every variation on the form, and in the Zachary Scott Theatre Center's production its lessons are driven home with verve and fervor and musical excitement

The House, director J. Ed Araiza's third collaboration with the student artists at St. Edward's University, is unapologetically about them, which makes for the show's strengths and its weaknesses
columns

Stephen goes west, sees some big rocks, and only adds to the splendor of the Marfa lights…

A relative passed away recently, and the duty has fallen to me to wind up her affairs. We don't know if she left a will. What can I do?

Should L-glutamine powder be taken with meals or between them?

Our latest batch of gaffes and blunders

Iran left out (again!), Germany mad over beer, and Cameroon embarassed by naughty uniform scandal. Who said soccer was boring?