ON THE COVER:
The Downtown Dominoes
news

The headlines are about Block 21 and Seaholm, but the long-term questions are about what the city of Austin should be

The score so far, and moves still to be made

The GOP chair wages war against his own party’s right- wing fringe; Business as usual in the Williamson County Attorney’s office

Another Texan for President?

Wal-Mart Ready for Round 2?

What's the difference between confusion and possible perjury? A couple of weeks.

How to Weave a Hanging Jury

The DA snaps back at "harassment" by GOP attack dogs

Perry, Dewhurst, and Gallego all have their own plans

The new boom is still a bust for many; and the White House gets favorable press – from itself

Are the big five of Austin's busy farmers' markets competing or cooperating?

Celebrating the Thai Songkran in Austin 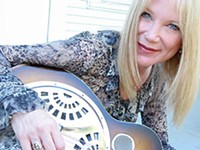 Austin slide guitar sovereign Cindy Cashdollar steps out from the side

The Return of Baldemar Huerta, succumbing to the Darkness, and I swear that I don't have a gun

One With a Bullet

The Insect Hospital, The Secret Society

Trouble and a Truer Sound

Voxtrot, Sparkwood, the Bright and Hollow Sky, Something Happened, the Murdocks, the Chapters

Voxtrot, In Black & White and in Color, The Bright and Hollow Sky, A Well Placed Kick, the Murdocks, Between Love and Death
screens

Out of Print and Onto Film

Brini Maxwell is the most refreshing, fun, and delightfully self-assured woman on television. So, catch her while you can.

In this round of historical revisionism there's not much to remember except, maybe, Davy Crockett becoming a fiddler on the roof.

Irish ensemble interweaves a dozen characters and their affairs of the heart.

Half-baked comedy is on the road to nowhere.

The first feature to come out of post-Taliban Afghanistan, Osama tells the story of a girl who masquerades as a boy.

Who says you can't be a princess and go to medical school too? 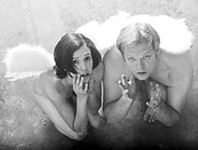 A Revolution in Acting

Ceramics You Will Not Want to Eat Off

'The Fine Art of Ceramics' is a straightforward title for a tight show, with five artists creating intimate textures and sculptures out of clay, porcelain, and plaster

The Joke's on Bush

Choreographer Deborah Hay is welcomed home from New York, Doyle Bramhall rocks the house at Zach, and new plans for the Long Center are being unveiled

Did You Say Love?

A chick and a dude productions pays tribute to love in their original production Did You Say Love?, but unfortunately, the show creates little stir and minimal interest

Michael Frayn's Noises Off is funny stuff, and while this Naughty Austin production sometimes works, it has only one basic level: big, fast, and loud

If myopic concerns could be traded as legitimate, revenue-based options, Austin would be looking at one of the great bull markets of our time

From whose necks are local faves Anthony Nak dripping this week – or Fashion Week for that matter? Does it matter? Sure. So much bold type, so little time!

Clues to your health may be found in your fingernails

Giant killers in Europe; the Posse comes to town