Love her or fear her, Austin's land-use queen rules the city her own way

As the task force on historic preservation concludes its work, the outcome remains uncertain

Saving Woody and the Woodburn

In the late Seventies, Betty Baker lent a hand to help rescue a cat named Woody and ultimately the old house on whose roof the cat was stranded

UT Lawyers Take On the Death Penalty in D.C.

A team of UT-based attorneys takes the Tennard case to the U.S. Supreme Court

One More Time for Lugo, Canchola

BY MIKE CLARK-MADISON AND JORDAN SMITH

The Alamo star gets busted in ever-lively Downtown Austin

A 14-month revolt dethrones the dictators of Bradleyville

The $420 million proposal is now in the trustees' hands

Lege leaders talk at length about their mutually exclusive goals

In the Tomstown counterattack, the GOP spin doctors are pointing the finger in every direction

Next on the regime-change list: Venezuela; and, Mendocino County rejects Frankenfoods

Eat, Drink, and Be Merry

Will Travel for Food (and Awards)

Food news you can use

Cross your fingers, Monte Warden and Bruce Robison may be headed for No. 1 with George Strait

With Tower Records closing in June, North Loop's new Sound on Sound hopes to fill some of the void

Cee-lo Green Is the Soul Machine 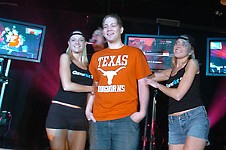 On Tuesday, GameRiot, the world's biggest video game festival, brought its sexy arcade to La Zona Rosa on its Spring tour, complete with a smoke machine, buxom blondes, and a cheeky British emcee

Do the right thing! Or not.

Cult comic book hero makes the transition to screen with much, but not all, of his charm intact.

It’s fitting that this is Disney’s last traditionally animated feature; the whole affair has a warm, nostalgic feel.

The science of efficiency is undone by the unpredictability of human emotion in this Swedish comedy.

A traveling troupe of actors in medieval England stumble upon a mysterious murder and end up single-handedly inventing the morality play.

Red Trousers: The Life of the Hong Kong Stuntmen

This double-layered documentary examines the creation of a Hong Kong action film and the impossible feats performed by the Asian stuntman.

Contemporary remake of the 1973 grassroots classic retains and updates the basic plot while losing much of the original’s heart and soul.
arts & culture

Students and colleagues sing in tribute to the late Martha Deatherage

Thirty years after the 1960s, Pop Art superstar Peter Max is still making art and still pushing the brand, coming to Austin on a national tour of his paintings and prints

UT delays the closing of Bass Concert Hall for a year, Conspirare wants to sing an ode by a young Austin poet, and Zach decides whether it wants to go out with Sally Bowles or Roxie Hart

Director Ken Webster has made a career out of discovering quirky, funny scripts by young playwrights that entertain as they offer insight into our culture, and that describes Rebecca Gilman's Blue Surge perfectly

In Ballet East Dance Theatre's Tribal, the company's original dances made you aware of the people around you and your connections to them
columns

Spurned by cool former friends and driven to distraction by Ralph Nader and the 9/11 hearings, Louis Black busts all Erma Bombeck in the SXSW aftermath

Hangin' with the 'gators in Brazos Bend State Park

Stephen gets all gushy when he poshes it up in Houston – sort of like The Simple Life, but backward.

I have a new car, and it keeps breaking down all the time. I've heard about the Texas Lemon Law, but how do I know if the law can help me?

The possible link between antibiotics and breast cancer

What's the latest scoop in HIV/AIDS research? To find out what went on at February's 11th annual Conference on Retroviruses and Opportunistic Diseases, come have dinner with Dr. Bob Wallace, as he gives a Retrovirus Conference update on Thursday evening, April 8.