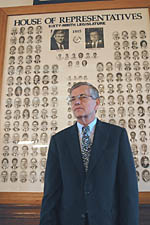 The 69th Legislature, 1985, marked a turning point in the future of Texas politics

What They Saw at the 69th Lege

The issues facing Texas, then and (still) now

Our endorsements for the March 9 Republican and Democratic primaries

A crowded field angles to succeed Margo Frasier as sheriff

The state steps in at the Texas Academy of Excellence

Will Walgreens Save Taco X-Press – or Vice Versa?

Neighbors torn over union of chain store and Southside icon

The police union cools off, the Sophia King lawsuit is dropped, and the ministers march on City Hall

Half a million expected at D.C. march in April

Doggett's the only winner on the League of Conservation Voters scorecard

Blaming It on Ralph, Again

The real question remains: How do we replace this two-horse scam?

I want a new central library, and I want it now

It's all about the barbecue

Continuing with the development along South Congress, D&L's Texas Music Cafe is one of South Austin's newest dining spots
music 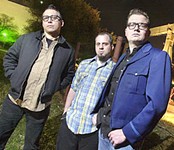 You don't need money with a face like that, now do you honey?

Hardcore Troubadour: The Life & Near Death of Steve Earle

The Story of Love

Marvelous Things, Three Points EP, I Run, It Will Consume You, Flashes and Cables

A guided tour of 'Greendale'

Todd Smiley is the gaffer in Austin

A little bit of Austin rolls into Auckland

The big red animated dog runs away and joins the circus.

Confessions of a Teenage Drama Queen

Teenager suffers the horrors of moving from New York to New Jersey.

The story is similar to the popular original – but its Borscht Belt setting has been relocated to pre-revolutionary Cuba in 1958.

The Fog of War: Eleven Lessons From the Life of Robert S. McNamara

Robert S. McNamara, the confounding former secretary of defense during the Vietnam era, may be visionary filmmaker Errol Morris' best interview "get" ever.

Musician Neil Young imagines a whole town and its people in a Super-8 movie that serves as a companion piece to his CD and touring show.

The Passion of the Christ

So the difference between this and a snuff film is … ?
arts & culture

A collection of Austin style makers and shakers

After a health crisis, Tapestry's Acia Gray slows things down

The Blanton chooses designers for its village green, last chance for input on city arts funding changes, and Mr. Sinus' Owen Egerton gets hit by a train

The U.S. of Cyndi Williams' American Arcana is a country unraveling, and Refraction Arts' production portrays this with a sense of urgency and tension
columns

Growing weaker with age? Sarcopenia could be the culprit.

The battle for Europe; and American success in the Premiership
TODAY'S EVENTS