ON THE COVER:
Train of Love
news

The Judges Rule: Map May Not Be Wise, But It's Legal

The federal judges rule in favor of the Texas congressional map -- even while admitting it may destroy the political hopes of minorities.

Kucinich: Creating the Voice for Peace

What Ever Happened to Peace on Earth?

A Different Shade of Green for Temple-Inland

Michael Olsen won't face trial in relation to a Sixth Street altercation in 2002.

Who'll be shooting whom between now and March 9?

BY MIKE CLARK-MADISON AND MICHAEL KING

After years of controversy, the feds finally crack down on "herbal speed."

Do Texas M.D.s now have to report pregnant drug users?

Your financial records are now fair game for the feds.

New wind-power customers would still pay a premium for GreenChoice.

Can Anybody Here Run This Country?

As the campaign begins in earnest, the Democrats ponder self-destruction

Grassroots change (literally) in Detroit; and America West finds another way to assault us with ads.

Good Words From the Right Mouth

The wines of the West impress Wes.

The holidays are over, and the Austin food scene is back to getting busy.

Gimme whatcha got for a poke chop…

Systems / Layers, The Civil War, "This Is Our Punk Rock," Thee Rusted Satellites Gather + Sing, Winter Hymn Country Hymn Secret Hymn, Clear Horizon, The Sand and the Stars, The Sky's Run Into the Sea, The Damned, Neurosis & Jarboe, Empty Spaces, The Sublime And.

Body of Light, The Perfect is the Enemy of the Good, Prey on Life, Remission, Recollection
screens 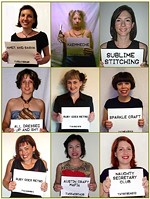 The women of the online Austin Craft Mafia got it made

Alamo and local author pair up with pool.

As the final eight episodes of Sex and the City hit the small screen, Belinda Acosta feels like she's leaving the Big Apple behind again.

The tall, dark, and handsome knight returns: Adam West on the record, in Austin.

Preinvasion, precapture: Joel Solér's documentary on Hussein "only presents the facts of the Iraqi regime, never trying to hammer any specific point home."

A fictional president's daughter (Mandy Moore) skips out on her Secret Service minders (this doesn't remind us of any presidential daughters we know).

The Revolution Will Not Be Televised

A coup d'etat in Venezuela is captured by a video camera, and the filmmakers use the footage to question the honesty of the news media.

In its 11th year, the annual Austin theatre celebration FronteraFest is as edgy as ever.

(Bring Your Own Venue)

'Dog' Has Its Day

Leading off the new year with good news: an arts success story from the Paradox Players and grants for Austin artists from the NEA.

On the right wing's ideological sleight-of-hand, unenlightened self-interest, and the humanitarian legacy of Cousin Eli

Read all about the peacock-themed Christmas tree fit for a Style Avatar!

Who built the first plane? Was it the Wright brothers or some folks right here in Texas?

Aren't there laws that protect debts from overzealous debt collectors?

I am in early menopause and was recently was diagnosed as hyperthyroid. I would rather not have surgery or radioactive iodine treatment. Are there other options?

Although it may sound like hooey in the retelling, this is the story of the author's discovery of his soul's expression.