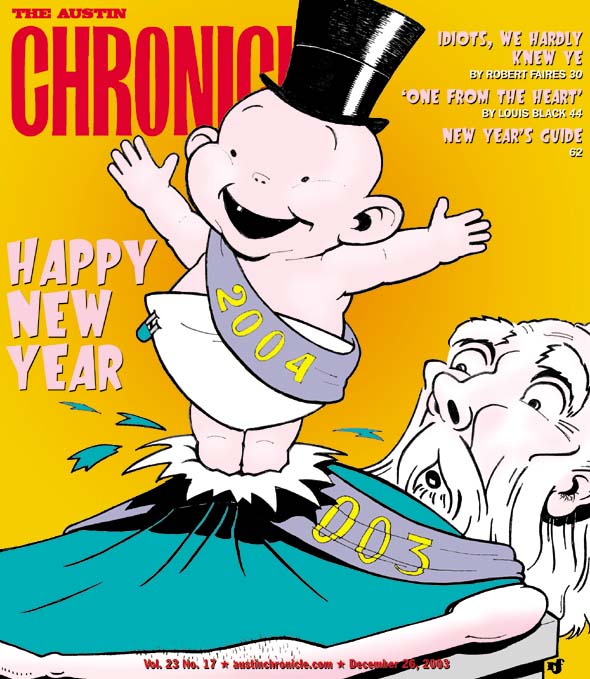 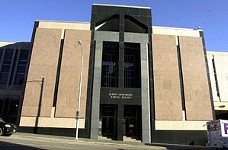 The testimony gets mighty strange at the re-redistricting trial.

Grandfather fought in the Philippines -- after that, things get kinda blurry …

Chapman out the door, off the hook

Neighborhood negotiations go much better for Stratus the second time around.

The state attorney general tells the city what it already knew.

Neighbors are pleasantly surprised with their Supercenter deal.

Can the state settle with the insurer without policyholders' consent?

The feds give their blessing to the new map, though the courts may still object

Medical marijuana backers score another victory in the appellate courts.

The federal redistricting trial will reverberate through national politics for years.

Austin @ Large: What Happens Next?

Jim's holiday gift list; and Sears gets a present from ABC.

All for the love of Pinot: Three Austinites make serious waves in the world of wine.

As 2003 swiftly comes to a close, I've taken a few minutes out of the holiday madness to ponder things I'd like to see in the coming year.

A partial roll call of people who died in 2003.

What a sampling of the Austin music scene wants for Christmas.

'One From the Heart'

Girl of Their Dreams

Disney was struggling to find a young star for Young Black Stallion. Then, Austinite Biana Tamimi found them.

With Screaming Black Yak Day upon us, Marc Savlov kindly gives out some kudos and guidance.

Native American actors playing Native Americans? On a major network? With no white guy in sight? This might be a good time to talk about diversity on the small screen in 2004.

Tim Burton is all grown up and getting serious.

Swoony kisses and true grit mark this Civil War epic from the director of The English Patient.

House of Sand and Fog

There's a definite sexual tension between Peter and Wendy in this live-action Pan that's heavy on the special effects.

Powerful performances resonate in this devastating and weighty follow-up picture from the director of Amores Perros.
arts & culture 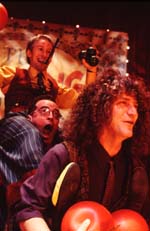 Hanging Up the Torches

After 20 years of juggling fire and other foolery, the Flaming Idiots are calling it quits.

New Wind to Blow Through Austin

Internationally recognized composer John Corigliano has chosen the UT School of Music to premiere his Symphony No. 3 for Wind Ensemble.

Austin playwright John Walch goes to Louisville for its festival of new plays; Vincent Kitch goes to Washington for Americans for the Arts; and Everett Quinton goes to Seattle for a new production of Twisted Olivia.

Meditations on memory, politics, and sexuality, brought on by the Beach Boys.

The story of how the Style Avatar got his sew on

Christmas isn't over till the last light comes down.

Can I cancel an order and get my money back because the item is taking so long to get here?

Until recently I had never heard of a vitamin called biotin. What is it good for, and what foods have it?

Learning to listen to your soul in all aspects of your life.

Happy New Year ... and Thanks!