ON THE COVER:
Women Dig In
features

The contractors' boycott against Planned Parenthood won a battle, but it's a long war.

Austin Energy and a former city employee team up to publish an idealized, clean-energy vision of the future.

Farmers Insurance: Off the Hook Forever?

Internal memos suggest the insurer frequently mishandled claims -- and the state may not be able to investigate.

How Lowe's Can Brewster Go?

Council Member McCracken gets an earful from supporters and nonsupporters alike reminding him of his big-box campaign promises.

Business leaders freak out over the city's proposed retail size cap over the aquifer.

Three high-profile contenders for an open seat on the Travis Co. bench

Kirk Watson's new job at the chamber stands at odds with his "message" as mayor.

The redistricting case resumes: one more battle in a protracted war.

Let's run government like a government; and, Tom DeLay uses neglected and abused children as a political tool.

On the phone, on the Web, on the farm, or in the store: giving a little Austin to the foodies on your gift list 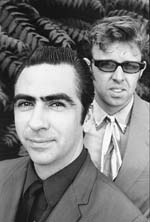 Stuff we read in notes passed in study hall

DVDs for under your trees

Not Your Average Movie Night

MoveOn.Org mobilizes viewing parties across the country for Uncovered: The Whole Truth About the Iraq War.

After watching the HBO production of Angels in America -- for all its faults and annoyances, its unrelenting attention to the crass and sensational -- I'm reminded all over again why TV can matter.

Numbers 215 and 218 of the Criterion Collection DVD series were more celebrated recently, Roman Polanski's Knife in the Water and Jean-Pierre Melville's Le Cercle Rouge, yet the unheralded No. 214 was the true devil in the woodpile.

Although maybe not a great film, Carnage is the most ambitious and assured feature debut in recent memory, and it is certainly distinctive.

French mind-warper has a puzzle-box narrative and a soundtrack by Sonic Youth.

Lingering on the Beloved Characters of 'What Ever'

Talking with Heather Woodbury about the people in her eight-hour performance novel, What Ever.

Ballet East's Paths traces some of the many passages through life.

An era of Austin theatre ends as Austin Musical Theatre files for bankruptcy.

The Blanton Museum of Art's "Prints from the Leo Steinberg Collection: Part II" continues the display of works from the 3,200-work collection begun earlier in 2003, and while this batch may contain fewer masterpieces, it's no less captivating or transporting.

The Toys Take over Christmas

Let the Toys Take over Christmas, as Second Youth Family Theatre does in this children's play by Patricia Clapp-Cone, a story about kindness and doing what feels right.

La Follia made a feast of leftovers for their post-Thanksgiving offering at First Presbyterian Church.
columns

The Planned Parenthood boycott is about moral bullying, not a commitment to preserving life.

It's the holiday season and Stephen is already ho-ho-Hoin' it up. What did the fashionable eat for turkey day?

In Corsicana, "excellent fruitcake" is not an oxymoron.

My friends have told me that I should use credit cards instead of cash because they offer more protection for consumers. Are they right?

I exercise regularly, but my doctor recently said my blood pressure is too high. Why would that happen, and how can I control it?