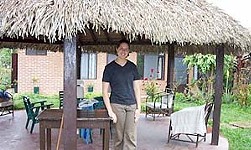 A young Austin nurse takes her skills and faith to Bolivia.

Mala Sangre: City Shoots Self in Foot, Then Reloads

The city's legal strategy -- or lack thereof -- in the Jeff White suit.

Is There Really a Case Against Officer Glasgow?

The grand jury indictment in the Owens shooting may be impossible to prosecute.

Doggett jumps into the new District 25, Barrientos is peeved; Congressional wannabes find themselves on the new Texas map.

BY MIKE CLARK-MADISON AND LEE NICHOLS

Yet another allegation of misconduct by the beleaguered APD assistant chief.

After 25 years, Doyne Bailey still commands attention at the courthouse.

The world's largest everything wows the crowd at City Council.

The State Board of Education shows the Lege its backside on "virtual charters."

The General Land Office throws the doors open for wind power in the Gulf.

Fox News viewers most likely to not know what's going on in Iraq.

The City Council moves to finesse the smoking ordinance.

UNC acts like a public university; and the Bushites “save” endangered species by killing them.

The Killing Fields, Kind Of

A culinary history of The Texas Chain Saw Massacre farmhouse

Earlier last month, I received a call from Sahar Arafat-Ray, director of the Central Market Cooking School here in Austin, wondering whether I would like to teach a class based on food for Day of the Dead. Since Day of the Dead is one of my favorite holidays, and since the class will be a benefit for the Austin Children's Museum, I happily agreed.

Virginia B. Wood updates you on all the food news you need to know.

A sampling of local acts bring Rocktober to a close. "TCB" gets in the van with Grand Champeen and encores at CMJ in NYC.

Birth of a Prince

New Beginnings, Close to My Heart, Blues in the City, Dem Bones, Falling Up

The Fat Man on Game Audio

Let the Work Speak for Itself

Every day is Halloween when you're Professor Griffin.

Reverse psychology: ways for execs to wreck a promising sitcom.

It's not a Halloween movie, but Lost in La Mancha offers a glimpse into Terry Gilliam's own personal nightmare.

A young Inuit hunter learns lessons when he is turned into a bear.

My Life Without Me

Who Will Be the Arts Tsar?

The two finalists for the job of cultural arts program manager addressed the public Oct. 23.

Erika Kjorlie takes auto worship to the next level with a series of photo transfers showing parts of custom cars in antique-looking colors and deckled edges.

Trying to walk through the purposefully spaced metal tines of Mowry Baden's K Walk is a challenge, one that leads to the discovery that each person on this planet has a claim to his or her own singular pattern of movement through space.

Leaders in the campaign to build the Long Center for the Performing Arts have decided to scale back the long-delayed project and build only two out of four theatres in an attempt to get it off the ground.

Choreographer Stephen Mills packed Ballet Austin's adaptation of The Taming of the Shrew with a rollicking physicality that spun ballet into slapstick and twirled slapstick into ballet and revealed an impressive grasp of Shakespeare's characters.

The Trojan Women: A Love Story

A Chuck Mee play is a veritable playground for young artists, but while they put a lot of thought and effort into the UT Department of Theatre & Dance production of The Trojan Women: A Love Story, the students behind it only scratched the surface of his work.

In their debut performance as the UT School of Music's faculty string quartet, the Miró Quartet repeatedly and impressively displayed its effortlessly immaculate, finely detailed sound and its sense of humor.
columns

"Mediocrity is never passive; it avenges itself for its deprivation." -- Nelson Algren

Got a fetish for fashion? Read the verdict on Austin's latest fetish fashion show. (Hint: Stephen seems to have kept his whip sheathed!!!)

Sometimes I notice that eating two foods at the same meal gives me an allergic reaction that I don't get when I eat the same two foods separately.