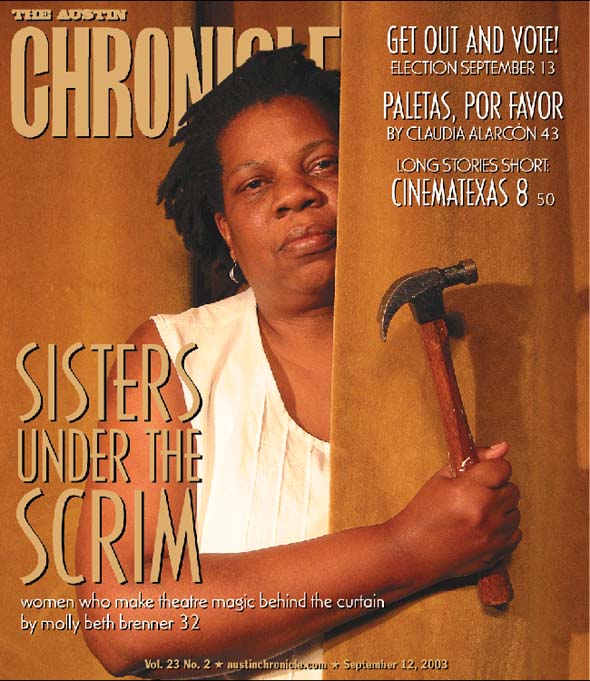 ON THE COVER:
Sisters Under the Scrim
news A UT editor says he lost his job at the Center for Mexican American Studies for complaining about administrative malfeasance.

The Center for Mexican American Studies and CMAS Books share a proud history at UT and nationally.

The Owl, the Chicken, and the Beast of Bentonville

Environmental and community groups have come together to defend South Austin against plans for three new Wal-Mart Supercenters.

Hightower Takes on the Bushites in His Underwear

Fair, balanced, and getting stupider by the minute

The health care chain takes over a cash-strapped residency program from the state.

Is APD Assistant Chief Jimmy Chapman being treated like any other cop accused of misconduct?

Are Texas doctors doing harm to truth and justice?

The worst anti-drug bill yet burbles up in Congress.

The City Council takes a hard look at the budget crisis -- and blinks.

Sen. John Whitmire flees exile in Albuquerque and says he'll return to the Senate with or without his Democratic colleagues.

Perry calls a third special re-redistricting session, and the Dems explore their options.

The Judgment of the Rev. Crabb

The Assault on the True America; Delay's Judicial Witch-Hunt There aren't any pushcarts at Jegimajo!, but you can sure get a taste of the Philippines there.
music 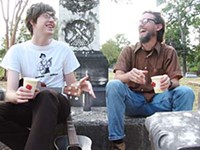 Down the River of Golden Dreams

Whiskey and the Devil

Run That by Me One More Time

Welcome to My World

The Golden Apples, The Soft Set

Tomorrow Is Fat and Old

The Soul of a Man, Soul Party!, The Marked Men, Revenge of the Bad Apples
screens

Inside Out: Special Guest Todd Haynes

Science Is Fiction: The Films of Jean Painlevé

Austinite Robert Rodriguez has, of course, been a maverick from the get-go, but it's wife and producer Elizabeth Avellán who often seems the cogent heart and soul behind her husband's outrageously entertaining productions.

AFS's Texas Doc Tour brings the formidable Héctor Galán and his 'Visiones' to One World Theatre.

Dispatches from the 2003 Film Festival

Paul Beck and Jason Archer, video artists and Waking Life animators, are the proud owners of a pair of matching Latin Grammys for their video for Mexican hip-hop rockers Molotov.

"You make sounds like you're a mean little asskicker. Only I ain't convinced. You keep talkin', I'm gonna take your head off."

At the center of its uniquely beating heart, American Splendor is a heartfelt valentine to Everymen (and Women) everywhere

A festival breakout shocker that twists genre conventions into a jarring battery of scares.

If you don't already worship Derrida, this film won't change your mind.

A grim and unmistakable masterpiece of bleak, black sorrow.

Samuel L. Jackson as an auto-theft detective, perhaps in over his head. Not reviewed at press time.

Once Upon a Time in Mexico

The third film in Robert Rodriguez’s south-of-the-border action trilogy is a whole lot of movie.

Mysterious doings in a Catholic sect, on the whole more silly than scary.
arts & culture

Sisters Under the Scrim

Six of the finest theatrical artists in Austin discuss their work behind the curtain designing lighting schemes, mixing sound, and creating and constructing sets and costumes and how their careers have been affected by the fact that they're women.

Where Are You Going? Where Have You Been?

The Artists' Recent and Upcoming Projects

Annie Weisman's satiric drama Be Aggressive, receiving its area premiere from the State Theater Company, gives a shout out to cheerleading as an outlet for teenagers to make themselves heard.

Perdita, playwright Monika Bustamante's chilling exploration of what can happen when loss barrels its way through everyday lives, is one of the most tightly crafted and beautifully written works of the year, and its production at Hyde Park Theatre is of sterling quality.

Theater at the J's production of Cabaret makes good use of the large hall at the Dell Jewish Community Center, creatively weaving the cabaret's musical shenanigans into the more serious larger story, in which the central characters fend off the accelerating horror of Nazi Germany by choosing not to see it.

For the Austin Symphony's season opener, conductor Peter Bay and company made a pleasure cruise of Smetana's "The Moldau" and turned Sibelius' Second Symphony into a ride through the perfect storm, while guest Emanuel Ax led a refined reading of da Falla's Nights in the Gardens of Spain.
columns

It was a "Mighty Real" period in at least one young man's life: Oh, those heady disco nights! Oh, the power! The Passion! The psychedelics! Oh, it's all within reach through the grace of MP3s! Oh, I should have saved them!

A new exhibit at the New Braunfels Museum of Art & Music in Gruene documents the love and skill that musical-instrument makers around America put into their creations.

After my third baby I didn't lose the weight I gained during pregnancy, and I have even gained some more. What is going on?