ON THE COVER:
Turning Tricks With The Amazing Ray
news 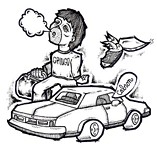 South for the Marijuana

The gringo travels to Mexico in search of weed and wisdom.

Chief Knee announced an investigation into Jimmy Chapman's testimony; it should probably start with Knee's own testimony.

The city budget battle moves toward an unanticipated quick conclusion.

A Tree Dies in Travis Heights

The Beast from Bentonville announces a third Southside Supercenter as the battle rages over the first two.

Asst. Police Chief Jimmy Chapman -- now under investigation in the Mala Sangre mess -- acknowledges he erred in another case.

In the Bush era, Labor Day gives little cause for celebration

For the Senate Democrats, Labor Day was just another day (not) at the office.

Bush leaves millions of children behind; and crazy John Poindexter gets tossed.

The Sultan of Scotch

At 18, Michael Parker had his first sip of whiskey at a Bennigan's. Two decades later, Austin has Opal Divine's Freehouse.

A personal appreciation for the Isle of Islay

Superior Wine and Fine Food for a Great Charity

Virginia B. Wood demands the restoration of the Schlotzsky's Original.

Jerry Garcia, bluegrass, and third generation jam -- thriving in Austin and beyond.

All the hip-hop that fits in ATX.

What, Me Worry? Yes.

'American Splendor' is one of the most celebrated movies of the year, and everybody loves my comic again. But … I dunno.

The latest R.J. Cutler project (American High, The Real Roseanne) tells the story of 17 UT freshmen during the 2002-2003 school year.

It's official: With the launch of the UT Film Institute, Austin is now the filmiest place in America this side of a Houston windshield in August, barring heavy hitter Hollywood, of course.

There’s something about the smarmy David Spade that brings out the worst impulses in a person.

The Secret Lives of Dentists

Surf's up! It's The Endless Summer: The Next Generation.
arts & culture

Turning Tricks With The Amazing Ray

With nothing up his sleeve, Esther's Follies resident magic man Ray Anderson pulls wonder -- and laughter -- out of thin air.

A Pulsating Light From Brazil

This fall, one of the city's most active and daring improv companies is calling it quits (or quilts, as their Web site has it): well hung jury is breaking up.

The Gallery 106 exhibition "Sacrifice" features images and text painted in red wine by José Toirac that draws mythic connections between wine and blood and also asks us to reflect on mortality and death as it is paid for the freedom of others.

Director Blake Yelavich opens his production of K2 with an image that is theatrical in the extreme, powerful and breathtaking, but sadly his Arts Entertainment Group production has no thrills left after that, leaving the show to the mercies of Patrick Meyers' long, tedious, sometimes silly script.
columns

Harvey Pekar's two Chronicle covers have been a rare, and deserved, exception to our 22-year focus on local news, culture, and events.

Why can't nutritionists make up their minds about whether fat is good for you or not?

What's the scoop behind the Vylette split? Why didn't Stephen go to the Warhol opening? And where should you eat this week? Peel slowly and see!

Americans are paying the price for lies about Iraq told by their leaders.