ON THE COVER:
The ARA Faces the Music
news

The ARA Faces the Music

For the Austin Revitalization Authority, Eastside renewal proves to be a long, slow dance

Central East Austin, On the Ground

An introduction to the East Austin revitalization efforts.

The Budget Battles, Round 3

Will Wynn proposes permanently shuttering libraries, parks, and other facilities to devote scarce resources to the ones that are left.

'The Perfect Storm': AISD Board Adds by Subtracting

The Austin ISD board of trustees passes its 2003-04 budget.

Ridership is up and sales tax is down, but the transit authority manages to avoid budget crisis

The village outs its opponents in its battle to stay incorporated

The fight over re-redistricting is a battle for the civil rights of minority Texans.

For the firefighters, City Hall's rep for putting its people first goes up in smoke

The second special session ends with a whimper, but the re-redistricting battle rages elsewhere

The Bush administration tries to roll back union gains; and Wal-Mart wants to dominate the banking world.

Virginia B. Wood hits the barbecue backroads with the Travel Channel's Epicurious. 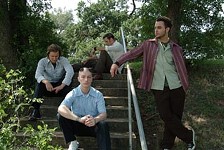 There's like some shows and stuff, and some new places to see bands, and, like, people are getting shot, too.

Strong words from Edward James Olmos, and what's on this week.

This 1944-set story humanizes the wastefulness of war.

Dracula: Pages From a Virgin's Diary

This horror sequel is more snooze than nightmare.

A hip-hop artist and a Jewish American Princess discover that bling-bling makes the world go ’round.

Ashton Kutcher suffers the price of fame with the release of this previously shelved clunker.

Russell Lee's documentary photographs of the Great Depression helped fashion our collective visual memory of that era, but his greatest achievement may have been the trust he engendered in his subjects.

Acting Out and Causing Trouble

The works in "Difficult Daughters," the final installation in the Blanton Museum of Art's "Projections" series of contemporary films, show women acting out and causing trouble, but they also demonstrate how women of different generations approach feminism.

There's nothing conventionally beautiful about Virginia Fleck's Indented Round Sod, a large, dun-colored disc of dried earth cemented together with mortar, and yet it exudes a strong, serene presence in its shape and balance of the natural and the manmade.

Months of speculation come to an end as Austin Lyric Opera appoints conductor Richard Buckley to the position of artistic director.

Proposition 12 indicates the problems with Texas constitutional amendment process as well as the current administration's and legislative majority's cynical agenda.

Recently I took 300 milligrams of alpha lipoic acid after breakfast and I felt weak much of the day. Is this too much or does this mean I shouldn't take it at all?

Can I Have My Security Deposit Returned If I Never Moved In?

Bettie Naylor's got 'em … but what are they? Also learn about a culture of men who chase the AIDS epidemic in a most personal fashion. Oh! And guess who turns 4???