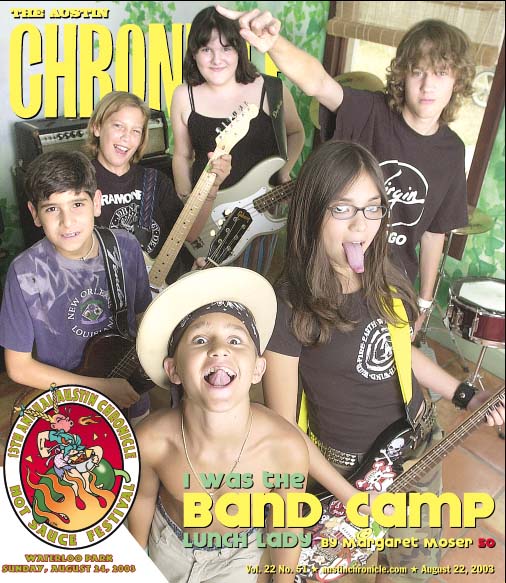 ON THE COVER:
The Kids Are All Right
news 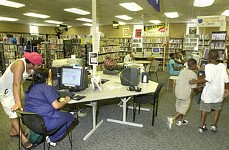 You Can't Touch This

The budget battles, Round 2: Citizens rally to save community services

'The Worst of All Worlds'

Staha Sex Case: The Story According to Knee

Who You Gonna Call? Dem-Busters!

A U.S. Dept. of Justice report chronicles the 'wacko' attempts to trace and trap the Killer Ds.

The school district prepares to finalize its 2003-04 spending plan.

The Sept. 13 constitutional amendment ballot features the good, the bad, and the silly.

The fuss over historic zoning is a symptom of larger city problems.

The GOP Senate tightens the screws on the absent Texas 11.

Flag-waving hucksters have no shame; and, Jim digs into his mailbag.

An exploration of the hot dishes in a hot town, or, where to go when you're not at Waterloo Park this weekend for the 13th annual Austin Chronicle Hot Sauce Festival.

Salt and Pepper Anything at T & S

Austin is a chile-loving town, all right, and in recent years, locals have become addicted to the definitive flavor of chiles grown in and around Hatch, N.M. Shipments of the big green chiles will be available fresh and roasted to order at several places around town for the next few weeks.

As she gears up to lead the Travel Channel's Epicurious on a Central Texas barbecue tour, Virginia B. Wood still finds the time to fill you in on the good news and the bad news among Austin foodies. 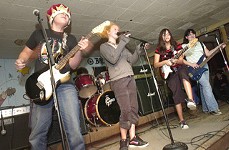 Punk rock synchronized swimming and eating ribs with Snoop Dogg: What do people in other cities do for fun?

Got a Revolution! The Turbulent Flight of Jefferson Airplane 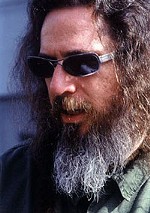 More Third Coast coups to coo over: Hanhardt, Haynes, and The Alamo.

Belinda Acosta is the only person on the planet who doesn't watch TLC's Trading Spaces.

Jubilee was a critical and commercial failure. Wells Dunbar explains why that's a dirty, rotten shame.

And Now ... Ladies and Gentlemen

On an American military outpost in Europe during the Eighties, the black market economy runs the show.

Cinema-obsessed filmgoers are the subject of this documentary.

The Merchant Ivory team say "I do" to romantic comedy.

A woman has a fling with a stranger in this thoughtful French import.

The answers to this new Bob Dylan movie are "blowin’ in the wind."

Furthering his American decline, Jackie Chan will wins no medallions for this stinker.
arts & culture 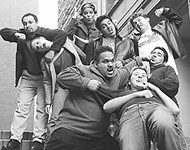 On the eve of its fifth Latino Comedy Fiesta, Austin's Latino Comedy Project has discovered a national audience for its signature brand of humor lampooning ethnic stereotypes and challenging cultural assumptions.

With the unveiling of a new mural at Austin's Greyhound bus terminal, three Martin Middle School students have helped make a valuable addition to both the celebration of their culture and the rich legacy of art in Austin.

More budgetary bloodshed in the UT College of Fine Arts, as Daniel Johnson, nationally renowned early music specialist and director the UT Early Music Ensemble for 17 years, has been cut loose from the School of Music.

Superstring, the theory that attempts to gather all the laws of physics into one comprehensive, easy-to-digest recipe, may be not quite fully baked, but "Superstring" the show from UT's Creative Research Laboratory presenting new works by nine MFA candidates, is perfectly cooked and damned tasty.

The Head, Hands, and Toe Show: Where's the Rest of Me?

With The Heads, Hands, and Toe Show, Tongue and Groove Theatre literally takes out the middle, man, using low-tech effects to create a series of movement pieces where only the arms, feet, and heads of the performers are visible, and the overall effect is simple fun.

Throughout "Splitting Aguas," Mexic-Arte's eighth annual showing of works by young Latino artists, there's a sense of our planet being trashed, but the show is far from a downer, as its featured artists boast a fierceness of voice that is invigorating and a wit that is refreshing.
columns

Mirroring those on the state and national levels, current city budget battles reflect the fact that we are not willing to pay for the quality of government we demand and expect.

Is wine better for your heart than grape juice, and does the color count?

My potential landlord says she has never used a lease in the past and doesn't want to use one with me. Is that OK?

Speaking of Queer Eyes: Hey, don't look at us … everybody calls it SoCo. And everybody seems to love the new Nordstrom … including our Style Avatar.

Fifty years ago, almost all movies were made for adults, yet children went to see them on their own or with others, and in the process, learned the mysteries of our cultural ideology.