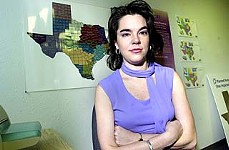 The 78th Lege chipped away at abortion rights

Picture This: The Lege on Women's Rights

A list of anti-abortion bills of the 78th Legislature

Not Quite 'Dead, Dead, Dead' Yet

So many items, so little time

The FAA issues a shame-faced report about its hunt for the Killer D's.

How did the one-time golden boy cross over to the dark side? Dapper Dan now has four years to find out.

BY LAURI APPLE AND AMY SMITH

Residents of a high-end Hays Co. subdivision object to a rock crusher over the aquifer and in their backyards

The Lege moves to foreclose court access to victims of asbestos exposure.

George talks the macho talk, soldiers walk the deadly walk; and Congress says "Health care for me, but not for thee."

The menu at Zin is a masterpiece, but what about the meals?

It's not delivery, it's "Second Helpings"!

Wine expert Wes Marshall explains why the zins are still in, and recommends his favorites. "I was born to Hand Jive, baby, and that's not even a euphemism," says Sarah Hepola, explaining the continuing appeal of camp classic, Grease. Project Transitions and the Austin Gay and Lesbian Film Festival will host a sing-along performance of Grease this weekend at the Paramount.

In anticipation of Jason Henderson's new comic, Sword of Dracula, the Alamo Drafthouse Downtown will host a "blood-sucking triple feature" this Friday.

Local screenwriter Todd Morris gets in good with Miramax / Dimension, and our apologies to the Ragamuffin Film Festival … not that they needed us, anyway.

Who was left off the list for this year's Emmy nominees.

With The Animatrix, the Wachowski Bros. decided to mine their man-dominated machine world for an endless array of storytelling possibilities, enlisting seven renowned anime directors to create a nine-part series that is just as sexy, gritty, beautiful, and philosophical as the original Matrix.

The Heart of Me

It's the story of a wife and mother living on a Sicilian island, who is prone to increasingly bizarre behavior, and the family who must cope with her.

Theatre critics have a place to sharpen their craft and learn about their profession, and Robert Faires reports on his stint as a teacher there.

The Rodriguez and Avellán film team rocks; the guv and Lege do not; waiting on Will Wynn & Company; and in Let Us Now Praise Famous Chroniclers.

We have replaced our concept of the heroic with the superheroic, and the sense of the possible with the impossible.

Human Growth Hormone comes outta where? Brenda Vaccaro did what? This week's AAF takes you where you never wanted to go…

Would a silicon supplement add luster to my hair and improve my nails?