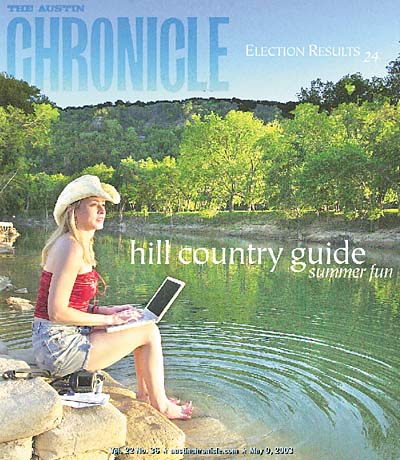 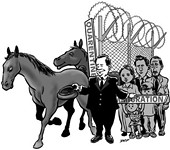 The Race Is to the Swift

In Texas, livestock are better vaccinated than children.

Will Wynn does; surprising Libertarian strength; Place 5 heads to run-off; ACC is saved; and more

Long Arm of the Lege May Strangle Webberville

Industry-backed bills would strip the newly incorporated village of its power to control strip mines and gravel pits.

If Tom DeLay has his way, Austin will have no voice in Congress.

Always count on the Texas Legislature to remember: The gold rules

What do farmers' market and foodie films at the Alamo Drafthouse have in common? Virginia B. Wood tells you all about them in this week's "Food-o-File."

All of Europe and more can be yours in this week's "Second Helpings."
music 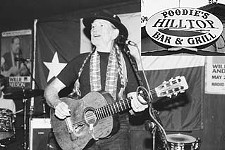 The Hills Are Alive

The Hill Country is teaming with Austin songwriters.

It All Started at a Small, 50,000-Watt Radio Station in Fredericksburg, Texas ...

A Salute to the Heroes of Texas Swing

A Salute to the Heroes of Western Swing

All Across the Grand Charade, The Acropolis 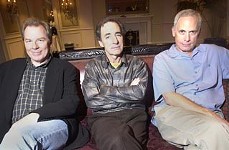 An interview with the men behind the Folksmen.

Through a Student's Lens, Quirkily

Head to the Hills

What a mess the FCC is making of things.

Anyone who needs reminding of the glory that was film noir, and the belly flop that was 1960s cinema, need only rent the Criterion Collection's 2-DVD set of Ernest Hemingway's The Killers, filmed in 1946 and 1964 by Robert Siodmak and Don Siegel, respectively.

Christopher Guest and his recurring cast of players give Sixties-era folk music a gentle poke in the ribs.
arts & culture 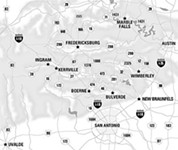 All the Hill Country's a Stage

No matter where you are in the Hill Country, you're never too far from a theatre. From Boerne to Kerrville, Marble Falls to Uvalde, community theatres are enthusiastically serving up choruses of "76 Trombones" and Odd Couples with a Lone Star twang, as well as some theatrical surprises.

With only 11 players, two musicians, and the sparest of stage trappings, the Austin Shakespeare Festival's production of King Henry V provides a sweeping panorama of life during wartime, one that has much to say to a nation at war today.

In The Ladee Leroy Show, Lee Eddy's mostly one-woman show, the tall, lanky, slightly androgynous writer-actress can be a bit manic, a bit abrasive, and a bit loud, but she also can be quiet, innocent, dramatic, sincere, silly, and often just plain uncontrollably funny.
columns

With few big surprises, the recent local election left us to ponder single-member districts, minority representation, and campaign spending. Also: the consequences of wristband counterfeiting, and The Chronicle Hour is no more.

The SARS outbreak terrifies me, and I want to do what I can to protect myself. Are there any nutrients that might help?