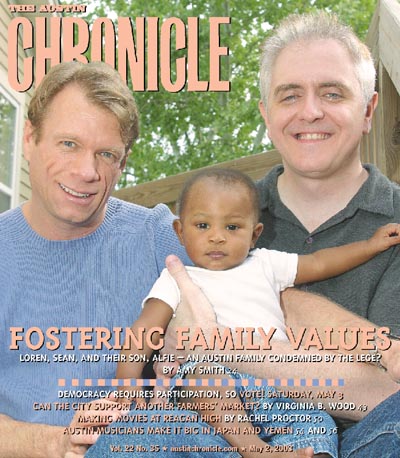 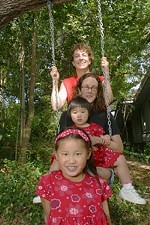 The Legislature engages in its biennial exercises in gay-bashing -- families be damned.

The Wisdom of Deacon Talton

Gay-bashing bills are a biennial tradition.

Down to the Wire

With Katz You Get Egg Roll

Allergic to taxes, the Lege tries to balance the budget with the rolls of the dice.

Schools' Check in the Mail

A small win for the good guys, followed by a huge loss. 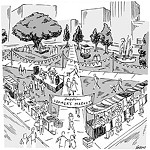 Rachel Feit lets you in on everything you need to know about the organic-food industry.

Virginia B. Wood simmers down quite a stew of news in this week's "Food-o-File."

We've got catfish … lots and lots of catfish.
music 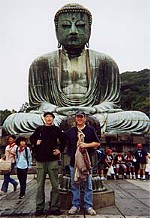 Austinites forge a career half a world away.

Bob and Tucker Livingston conquer the Middle East through songs not arms.

Austin mayoral candidates give new meaning to "Rock the Vote" 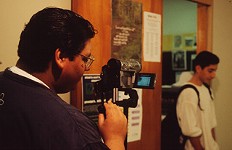 Putting a Name to a Face

Dallas' USA Film Festival definitively answers the question, "Who is that guy?" with its tribute to Texan character actor Stephen Tobolowsky.

The "Portraits of Islam" film fest and, of course, Buffy.

Miyazaki conjures a pubescent fable out of whole cloth that both kids and adults will enjoy immensely. Castle in the Sky, from 1986, isn’t Miyazaki’s finest, but that’s like saying Jackson Pollack’s Panel With Four Designs isn’t as good as his Lavender Mist.

This tour de force of modern cinema is a technical feat filmed in one, uninterrupted, Steadicam take that leads us through a vivified tour of Russian history that wends through the Hermitage Museum in St. Petersburg. 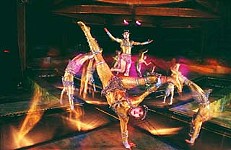 Dream of a New Circus

In the two decades it has taken for Cirque du Soleil to reach Austin for the first time, this Montreal-based troupe has not only reinvented circus as performance art but grown into one of the most unexpected and unlikely of entertainment empires.

Son of the Graphics Giveaway

Just as the success of the first X-Men film has spawned a sequel, so has Free Comic Book Day, and on May 3, 2003, this promotional event for graphic literature -- or funny books, if you will -- will give away more millions of comics about everything from guys in tights trying to save the world to schlubs in offices trying to hold onto their jobs.

Utilizing technology to combine dance and computerized music has come a long way since the Eighties, as can be seen in the 2003 edition of EARS & Feet, the annual UT College of Fine Arts program that pairs student composers with student choreographers to collaborate on a piece.

The grand old troupe of the Austin improv comedy scene is closing its home of six years, and the Texas Commission on the Arts announces the appointments for state poet laureate, state musician, state two-dimensional artist, and state three-dimensional artist for 2003 and 2004.

Cirque du Soleil's Alegría brings to athletic, spellbinding performances a genius of creativity unlike anything you've seen at the circus, turning a night under the big top into a magical exploration of a world of intrigue and mystery, grace and daring. And joy.

The Master and Margarita

Gaslight Theater is only the second U.S. company to stage Mikhail Bulgakov's The Master and Margarita, as adapted by Richard Helweg and Michael Franco, and while their faithful tribute beguiles in places like the original, it runs a little too long and treats the source a little too reverentially.

Seeing "Natural Selections," Arthouse's new two-artist show featuring collages by Julie Speed and sculpture by Bale Creek Allen, reveals these two to be excellent examples of Austin cultural affluence, creating work that is rich in artistry and inventiveness, with a touch of weirdness thrown into the mix. .
columns

Can you tell me the benefits of taking potassium? Is there enough in my multivitamin/mineral? What foods are rich in potassium?

We call them "retirees," although in other cultures and eras they would be elders, but if they had anything real to do they wouldn't be coming here to Jean, Nevada.