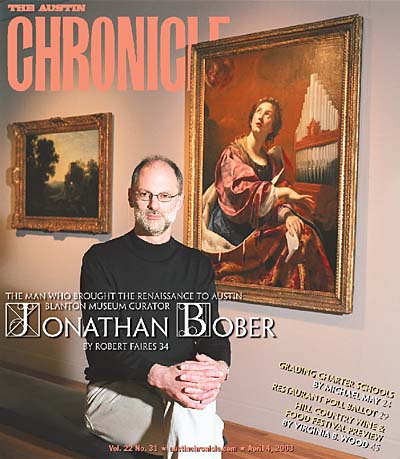 Who Can Vouch for the Charters?

The state's freewheeling experiment with charter schools gets a poor grade.

The experience of charter schools is mixed, at best

(Circle) C You in Court!

Mental Health Care Meltdown: Is There Room for Hope?

The Texas Association of Business's legal future rests in the hand of two Travis Co. judges.

A Wider War On GOP Bucks

Cash Falls From Sky at Lege

Activist Heading Back to Iraq

King Probe May Soon Go On

Wal-Mart on the Aquifer?

Tort Deform gives business the gold mine, the rest of us the shaft.

Proudly "successful" businessman Brad Meltzer aims to cut to the chase in the mayor's race. True to Its Own Terroir

Can Saveur magazine save the soul of the Texas Hill Country Wine and Food Festival?

Just because it's the biggest and busiest week on the Texas culinary calendar doesn't mean that there isn't plenty o' news to report on, in this week's "Food-o-File."

There's more Thai where that came from, in this week's "Second Helpings."
music

Looking for a way out with Jay, Jeff, and the gang

Who's Next Deluxe Edition

The Essential Sly & the Family Stone 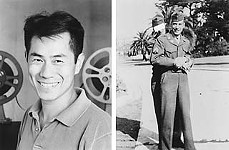 The Boys in the Barracks

Cat and Mouse, Confined to a Kiosk

How to resolve conflict? Japanese import Iron Chef has the right idea.

Thirty years ago, Terrence Malick's magnificent debut film Badlands proved that with every bit of genius comes a bit of madness as well.

What a Girl Wants As a curator for UT's Blanton Museum of Art, Jonathan Bober played a pivotal role in securing the Suida-Manning and Steinberg art collections, thereby giving some of the world's great art a home in Austin.

The sophomore model of the David Mark Cohen New Works Festival at the UT Department of Theatre and Dance is a full10 days of original dances, dramas, solo performances, site-specific productions, and musicals, supplemented by panel discussions, master classes, and open classes having to do with the work presented -- 45 events in all.

Naughty Austin makes a new home for itself on the Eastside, and Katie Pearl and Lisa D'Amour return to the Grove on Lamar.

The Zachary Scott Theatre Center's production of Terrence McNally's Tony-award winning Love! Valour! Compassion! may last three hours, but it captured every second of my attention, weaving themes of family and forgiveness into a moving experience.

When he wrote Saved or Destroyed in 1994, playwright Harry Kondoleon knew he was dying, and with its faithful rendering of his dreams and truths, the Mainline Theater Project keep Kondoleon's beautiful creation alive.

The return performance by the magnificent Paul Badura-Skoda with A. Mozart Fest was like witnessing a breathtaking conversation between a master craftsman and some mysterious presence, an unseen force that attends the pianist's graceful execution of some of the world's loveliest music.
columns

The war in Iraq has diverted our attention from other important matters, including a truly destructive proposed federal budget, mirrored by Texas' very own fiscal abyss.

Thoughts on the war's explosions of bombs, dreams, and preconceptions.

I would like to try SAMe for depression. What is good and what is bad about it, and is it safe?