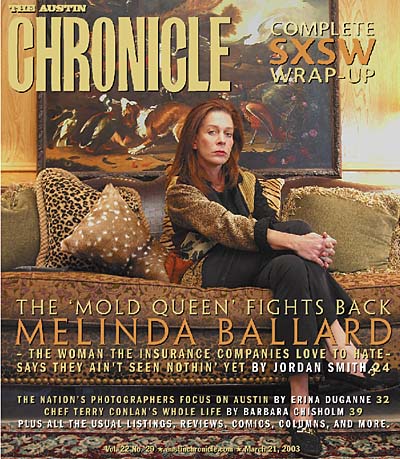 The 'Mold Queen' Fights Back

Melinda Ballard beat the insurance companies in court. Now she's carrying her fight to the politicians and the public.

In Austin, Safety Comes at a (Too) High Price

As an Iraq war becomes inevitable, local responses range from the stupid to the sublime.

Austin's $100 limit on campaign donations survives another court test -- does that mean it works?

Being an arms pimp backfires on the U.S.; and to see our nation's future, look at Texas' miserable present.

With great SPAM™ comes big changes, great and not great, in this week's "Food-o-File."

Summer's coming, y'all: time to get smoooooooth.
music

Wrapping up SXSW 03 with a sampling of Saturday night showcases.

Hang on the Box

I Love You But I've Chosen Darkness

Panel: Producers and Their Process

My Flesh and Blood

Rise Above: the Tribe 8 Documentary

The Revolution Will not Be Televised

Documentarian Jamie Meltzer pokes under the rock of the music industry in Off the Charts: The Song/Poem Story.

Suki Hawley and Michael Galinsky's Horns and Halos isn't so much about Bush, but rather the book about the Bush that Bush didn't want you to know.

By combining elements of classic Westerns with a modern narrative, Hill and his capable cast render a thrilling look at characters often misinterpreted by Hollywood.

Turning the Lens on Us

Austin is hosting the 40th national conference of the Society for Photographic Education, which aims to consider how the United States has been represented by photographers in the past and where photographers need to focus their attention in the future.

When pianist Paul Badura-Skoda plays classical music of centuries past, he strips away the centuries of romantic interpretation and provides us with the beauty and lively spirit of the music as it was originally heard.

In his large charcoal drawing Rock n' Roll, Drugs and Sex, artist Randy Twaddle reverses a familiar phrase and places it on a curling banner floating through a dark and grimy background, making it an example of verbal recycling in an otherwise wasted landscape.

The stars come out at the Paramount when the Texas Medal of the Arts Awards are given, and the Bastrop Opera House shoots for a national title in the American Association of Community Theatres competition.

The Vortex Repertory Company's retelling of Hawthorne's The Scarlet Letter feels like it's coming from a fitful, troubled sleep, a hazy dreamscape in which director Michelle Fowler and her cast create a society of suffocating morality and the cruel reprisals that await any who violate its rigid rules of conduct.

In the best Hollywood tradition, the good folks at Refraction Arts Project have created a sequel to 2002's Celebrity Crush, and the new series of sketches and films about obsessions with and fixations on various celebrities, old and new, has as much to recommend it as the old.

Hush: An Interview With America

In Hush: An Interview With America, the students of the UT Department of Theatre and Dance handle the complexities of James Still's play with steady hands, which may please viewers who enjoy supporting the development of young artists, but the play's inconsistencies may leave other visitors to this theatrical lab disappointed.
columns

Let us hope the war in Iraq is quick, the death toll is low, and that all dire predictions prove unfounded; let's also hope that we haven't destroyed our own country ideologically in order to save it.

George W. Bush refuses to put our money where his mouth is in matters of domestic defense, even though all the experts testify that America is as vulnerable to major terrorist attacks today as it was on 9 / 11.