The AISD budget task force closes its deliberations as the Board of Trustees gets ready to act.

The Telecommunications Infrastructure Fund -- and the have-nots it supports -- fights to avoid an early death by budget ax.

From Liberty Lunch to Homeland Security: Austin's Walk With CSC

Computer Sciences Corp. is now one of America's largest defense contractors. Is this a problem for City Hall?

Getting Crowded in Place 5

Brack Watchdogs Give Up

"Please, Sir, I Want Some More"

The legislative budget process is leaving buckets of blood on the floor.

Austin @ Large: Max on a Mission

Bush acts like layoffs don't exist, and uses Iraq to distract the media from corporate corruption.

Welcome! The following is our comprehensive Austin guide to the American classic commonly known as the hamburger.

Austin gets two new eateries and a possible fosterer for many more, in this week's "Food-o-File."

Are you a vegetarian or curious about dishes without meat in them? This "Second Helpings" is for you, then.
music

Long May You Run

Are you ready for the fallout?

Airs Above Your Station 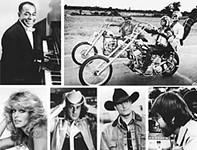 To Kill a Mockingbird screenwriter and Texas Film Hall of Fame inductee Horton Foote reflects on the last 87 years.

The Merry Hempsters Hit the Road

In 2001, actor and activist Woody Harrelson rang friend and filmmaker Ron Mann up and invited him to tag along on an environmental whistle-stop trip in a hemp-fueled bus -- "The Organic Living Tour." Two years later, Mann's digital video-shot doc Go Further is all but in the can.

The Camera Is Mightier Than the ...

Documentarians Kim Bartley and Donnacha O'Briain were right in the belly of the beast when the Venezuelan coup began -- specifically, in the Presidential Palace, right as the opposition stormed it.

Back in the Saddle Again

Long considered a lost film, Peter Fonda's The Hired Hand gets its long deserved due at SXSW.

Nancy Savoca comes with two films tucked under her arms -- Dirt and Rebel Without a Pause.

'Art Should Be Convulsive'

Star Crispin Hellion Glover, director Glen Morgan, and producer James Wong all gathered at the Alamo Drafthouse Downtown on Sunday to celebrate their new film, Willard, about a vermin-happy outsider who fights back against an unfeeling world via an army of killer rats.

Fred Rogers had a lot to teach us about being a good neighbor.

Over the past 40 years, Sidney Lumet has directed classics such as Serpico, Dog Day Afternoon, and The Verdict, works that overshadow the rest of his 41-film career. The Pawnbroker is overlooked now, despite exploring some of the themes that would define Lumet's later, more recognized films.

Bringing Down the House

Colombani's debut features a finely nuanced and altogether striking performance by Tautou, whose wide eyes adroitly reflect an inner world that ricochets from hopelessly in love to simply hopeless.

Tears of the Sun

Started in 1978 as a grassroots feminist arts collaborative, Women & Their Work has evolved into an Austin institution, which has survived collapsing economies and shifts in location and mission to become one of the city's premier visual arts spaces.

The Women & Their Work exhibition "Inside / Outside: Work by Texas Women Photographers" finds established Texas artists alongside newcomers, and what this important exhibit reveals are new and older generations in step with one another, the future and the past side by side.

In Wash, influential media artist Bill Lundberg projects video loops of hands being washed onto the bowls of three white sinks, calling to mind our culture's fears, now deeper than ever, of dangerous filth that might do us harm.

Austin helps the Lysistrata Project become a global phenomenon, and Governor Rick Perry and Austin Mayor Gus Garcia speak out in favor of the Long Center.

Barrio Daze, a series of damn funny and poignant sketches created, woven together, and performed by Adrian Villegas is both absurdly funny and dead-on insightful, not only dissecting stereotypical views other groups hold of Hispanics, but challenging those Hispanics have applied to themselves.

Should you attend the UT Department of Theatre and Dance production of Heartbreak House, you'll have to work to keep up with the student cast, which blasts through the wordy script, but your labors will be rewarded by some fine design work and acting, and G.B. Shaw's timely critique of the leisure classes awakening to a world at war.

The Bedlam Faction is as smart a bunch of actors as you'll find, and they take the Jacobean tragedy 'Tis Pity She's a Whore and make its extra-dense language crystal clear and its characters comprehensible, and the story relatively easy to follow, but the production suffers from a flatness born of a lack of specificity.
columns

In such intense and crazed times, film and music of soothe and feed the soul; SXSW 2003 provides plenty to feast on.

Stephen makes the party rounds this week and finds out which celeb made an appearance at Flipnotics.

How do I know if I need a B-vitamin supplement? What does it mean to "balance" the B-vitamins?

A Hundred Years of Shadows

One hundred years after "The Great Train Robbery," motion pictures have transformed consciousness into a Kingdom of Shadows.