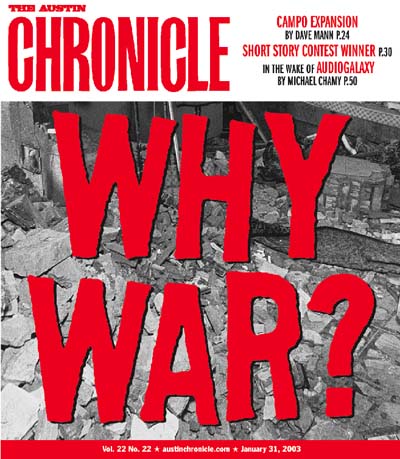 CAMPO expansion may change the roles of the Central Texas transportation game.

SOS Alliance enters the controversy over toxins at Barton Springs.

BY MIKE CLARK-MADISON AND AMY SMITH

Is the Wolf at the Schoolhouse Door?

AISD's budget cuts could be deep and painful.

Max For Mayor, For Real

Hospital District Gets an Exam From the Lege

Austin and Travis County lawmakers ready a hospital district for the Legislature -- and then the voters.

Austin @ Large: Austin at Large: Too Many Cooks?

Capitol Chronicle: Nothing From Nothing Leaves Nothing

The state budget proposals are walking on moonshine. 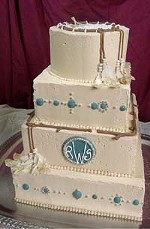 A New Kind of Catering

Local businesses are marrying style with substance on the wedding table. 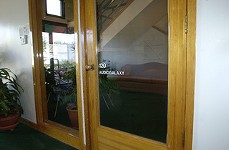 I Want My MP3s

The rise and demise of Austin's once dominant file-sharing service, Audiogalaxy

Under Construction, The Blueprint2: The Gift and the Curse, Loyalty, Paid the Cost to Be the Boss, Dutty Rock, It Ain't Safe No More, The Last Temptation, God's Son, React, Quality, Phrenology, Electric Circus 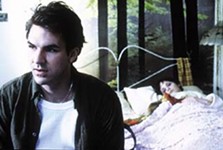 There was no snow at Sundance this year, but a strong slate nonetheless.

The Austin Film Society presents an evening in celebration of Sam Fuller.

Shelter From the Storm

Set in 1931 Australia and based on a true event, Noyce's film shows what three half-caste aboriginal girls experience when they escape the camp where they have been forcibly sent in order to become anglicized. The music is by Peter Gabriel.

Gone, with one major exception, are the delicious hysterics of Almodóvar's earlier works; Talk to Her is a mostly restrained, though by no means unemotional, work about two men in love with comatose women.
arts & culture I Hear a Symphony

Composer Kent Kennan has been an essential voice in America's musical counterpoint since 1936 when he won the Prix de Rome Composition Prize. Now, at age 90, he'll hear the Austin Symphony play his composition for the very first time.

On a wet and shivering Saturday night, FronteraFest offered something, finally, to combat the chill outside: the warmth of great performers.

Local theatre artists join a planetwide call for peace with the Lysistrata Project, the UT PAC's associate director leaves for Pittsburgh, and the Puerto Rican Folkloric Dance & Cultural Center gets a room of its own.

Genius and madness are the ac and dc of inventor Nikola Tesla's life, as portrayed in the Rude Mechanicals' biographical tribute Requiem for Tesla, and this new version provides the atmosphere and quickening charge of an old Universal horror film.

As an old woman shuffling rhythmically in slow, jagged lines across the stage, accompanied by an audio montage of media snippets, instructional tapes, and music, contemporary dance artist Ann Carlson explores the way memory shapes narrative and time in Blanket.

In On It: da da kamera

As presented by da da kamera at the Fresh Terrain performance festival, Daniel MacIvor's In On It provided a beautiful and quirky evocation of chance, choice, love, and life's inevitable drift (or plummet) toward death.

Drummer Wanted, Richard Maxwell's drama of a young garage musician's relationship with his mother while recovering from a broken leg was memorable, but chiefly for the distinctively expressionless, uninflected style of delivery that called to mind really bad acting on purpose.
columns

Al Qaeda could not have hoped for a more perfect response to 9 / 11 than the American invasion of Iraq.

What is inulin good for, and where can I buy it?