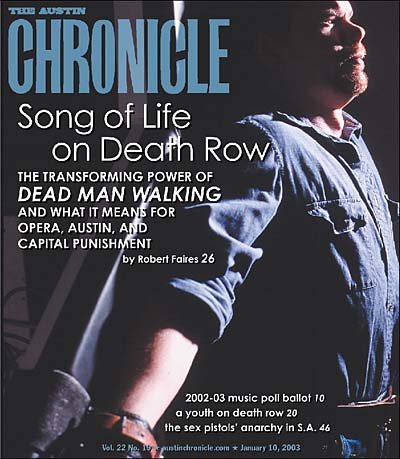 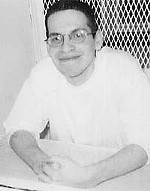 A Young Man on Death Row

The reconstruction of Barton Springs Road suffers another delay

No Abortions for Men, Either

Not So Fond of Fonda

Holiday Greetings From the INS: Hit the Road

When Weed Is Really Weed

Breaking stories from Austin, the region, and elsewhere

BY MIKE CLARK-MADISON AND MICHAEL KING

Republicans offer the same predictable help to the unemployed: tax cuts for the rich.

Look out: Bush is "revising standards" again; and the tax man is out to get the poor millionaires of Darien, Conn.

When a waiter forgets the customer and the service, even good food can be tough to swallow, as Mick Vann discovered on a recent visit to the Tea House.

A World of Noodles

You'll be relieved to know that MM Pack has the noodle wisdom.

The Complete Book of Pasta and Noodles

The birth of Austin's punk scene: the Sex Pistols at Randy's Rodeo in San Antonio, 25 years ago this week.

Out with the old ("Dancing About Architecture"), and in with the news: "TCB" and the closing of the Mercury and Sound Exchange.

'The Magic of Flight'

Go ahead and wiggle your wings at the incoming IMAX movie, The Magic of Flight. We know you want to.

This Saturday at the Alamo Drafthouse Downtown, hx0rs and newbies alike will compete in the third installment of the Linux Top Gun.

Say hello to two Patric(k)s, and goodbye to some recently departed film greats.

This film rendering of the sordid junkie degradation and deaths of Sex Pistols' bassist Sid Vicious and girlfriend Nancy Spungen bleeds through with a tad too much MTV, but few music biopics can top Gary Oldman in Sid & Nancy.

Charles Dickens' picaresque teems with wonderful performances and bright direction by McGrath (who also did the same for Jane Austen in Emma).

Power and Terror: Noam Chomsky in Our Times

Song of Life on Death Row

How Dead Man Walking came to be an opera -- and to be produced in Austin before almost every other city in the world -- reveals the great risks and rewards in developing new works for the modern operatic stage.

More Than a ZIP Code

In the exhibition "Road to 78704," artists Jill Alo and Tina Weitz pay tribute to the distinctive mood and ambience of South Austin.

A family of Austin artists faces deportation, playwright Cyndi Williams gets some recognition in Big D, and Arts Center Stage both gives and gets.

Even though 2002 was an exceptional year for American cinema, American art has never been more marginalized, ghettoized, and controlled, than it is today.

Is it possible to be allergic to electricity?