Them That Bankrolls, Gets

The Sewers of the Villas

An anonymous Congressman gives generously to Eli Lilly by sticking it to autistic children; and something stinks at the Pentagon -- literally.

The Austin Chronicle Food staff looks back at the year in food, 2002.

The year in food

The last installment of "Dancing About Architecture."

The Austin Chronicle film reviewers offer their end-of-the-year lists and combine their individual lists to reach a group Top 10.

This film adaptation doesn't so much recall the glory days of movie musicals as give it a new, era-specific reason to wake up and shake its tail feather.

One Extreme to the Other

For every creative triumph in the Austin arts community in 2002 -- and they were plentiful -- there seemed to be a corresponding defeat, usually tied to the economic downturn and its problems for the arts community. 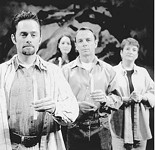 Austin Chronicle Arts Editor Robert Faires delivers his list of the Top 10 most memorable productions in the performing arts for 2002.

Most Memorable Theatrical Offerings That I Chanced to See in 2002

Austin Chronicle reviewer Barry Pineo delivers his list of the Top 10 most memorable moments in Austin theatre for 2002.

Ridiculous Theatre Company's Everett Quinton comes to Austin to do a "twisted" version of Oliver! for Zach, Ballet Austin gets in touch with New York, and honors for painter Michael Ray Charles and Austin Babtist Women.

Our Top 10s give you another chance to laugh, and rail, at us; Republican dominance and a state budget crisis bode ill for government services, and for Austin; we bid a fond farewell to "Dancing About Architecture" and chart a new course, a bit.

In 2002, cinema has been the healthiest of our arts. The movies' range and variety relieve what has otherwise been a bleak time for our culture and our Constitution.

What do "green drinks" provide in the way of nutrients, and are they any better than eating green vegetables?