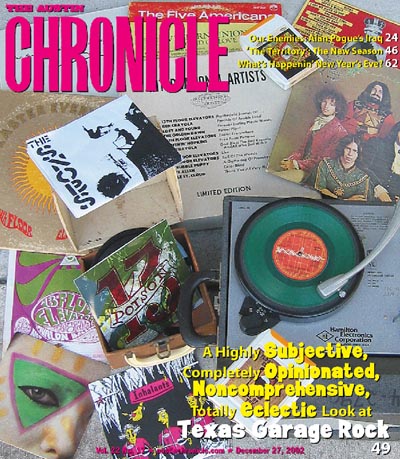 Faces of the Enemy

Photographs from Iraq by Alan Pogue

The Theft of Wages Is Sin: Fighting for Migrant Workers

Advocates for migrant workers and local law enforcement team up to get deadbeat employers to pay up.

The third whistle-blower suit by an Austin cop over the truncated Mala Sangre probe goes to court.

A controversial Southeast Austin housing project rushes to open by a Dec. 31 deadline for federal support.

Police Oversight at the Lege

Enjoy your present from Gus Garcia. (You can't return it. Some assembly required.)

As the year turns, the auguries of war predict the worst

Corporations now charge you to pay them; and Calpers corrals big business deserters. 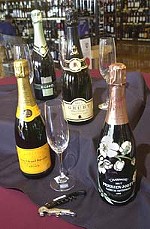 Champagne wishes bubble up around the holidays, and Wes Marshall is the man to help you make them come true.

Our Dinner With Tony

Wes Marshall and Mick Vann do dinner with a worldly renegade chef.

BY WES MARSHALL AND MICK VANN

Virginia B. Wood introduces you to the most fascinating food people of 2002.

One more cup of coffee before you go to the valley below, in this week's "Second Helpings."
music 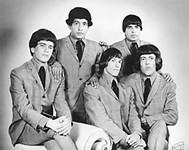 In the Beginning: the Sixties

10 Texas Garage Rockers From the Sixties

10 Garage Rockers From the Eighties

Cleanliness Is Next to the Gutter: the Nineties

Monkeywrench in the Works: Tim Kerr

Genius: The Best of Warren Zevon

Sweet Ride: The Best of Belly

Painting the Corners: The Best of Fastball

The Very Best of Fleetwood Mac

No Stranger to the Dark Now you can snoop on your own friends and family. The question is, are they really worth snooping on?

UT professor Lewis Gould compiles the best of his father Jack Gould's columns into an enlightening discourse on the early days of television.

The pre-Top 10, unofficial year in review.

Catch Me If You Can

The film is based on the autobiography by Frank Abagnale Jr., who at the tender age of 17 led the FBI and various other law enforcement agencies on a giddy global romp while he kited, forged, and manufactured checks over a four-year period. 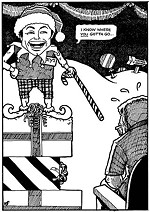 What It Is to Be Human

Actor Martin Burke, now in the midst of his fifth sell-out run as David Sedaris' Little Elf in The Santaland Diaries, talks about that show's success and his career as an actor.

The National Endowment for the Arts played Santa Claus last week, dropping federal funding in the stockings of arts organizations, and even went so far as "comin' to town" to do it, announcing $26 million in grants, including $287,000 to 14 local artists and arts organizations, from here in Austin.

The Santaland Diaries, which recounts writer David Sedaris' experience as a Macy's elf, is funny, irreverent, and sneakily heartwarming, and with Martin Burke in the driver's seat as Krumpet the elf, the Zachary Scott Theatre Center production is a nonstop, exhilarating ride.

Paola Morsiani, curator of the Austin Museum Of Art's exhibition "Pertaining to Painting," fit in the show's four rooms so many -isms and nationalities that he could have called this exhibition "Now That's What I Call Painting, 2002!"
columns

The mayoral race is on, with and without some usual suspects.

Is it worth the extra expense to buy organically grown produce?

Reflections on how Western civilization lost its moral authority.