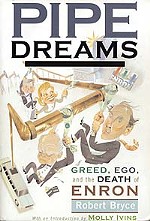 Enron's Masters of the Universe

A Conversation with Robert Bryce

After 10 years, the Great Streets master plan runs into controversy over two-way streets.

No Dove of Peace Over Georgetown

Austin's arts funding process leaves much to be desired -- and consulted.

The director of Vision Village project pleads guilty for failing to monitor the doomed venture.

A look at breaking news items from around the city, state, and world

When Green Is Gold

For a change, this November's state elections might actually be interesting.

Be a Jewel; Truly Beautiful Art 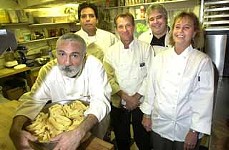 Virginia B. Wood catches up on culinary news in this week's "Food-o-File."

If you're not waking up in glorious Mexico, you might as well wake up to migas, galletas, pan dulces, piedras, or buñuelos at one of Austin's Mexican bakeries.

Rachel Feit writes that "sandwiches are Texicalli Grille's real specialty." Read on to see if they live up to the legend.
music

Groobee gal Susan Gibson steps out on her own, chin up.

The Mighty Sincere Voices of Navasota

Lifted, or the Story is in the Soil Keep Your Ear to the Ground

A Rush of Blood to the Head

The Who live
screens

As the Texas and national film industry feels the burn of runaway production, many agree with one directive: Blame Canada.

There's no pussyfooting about it: The Truth About Charlie is a remake -- of the widely adored Charade -- and Jonathan Demme isn't apologizing for it.

You're Looking at It

The heart of rock 'n' roll may be Cleveland, but the "Heart of Film"? You're looking at it.

Classes and a contest.

King Rat is a terribly honest and brutally realistic film about WWII P.O.W.s -- a perfect counter to its story of terribly dishonest people living in brutal times.

I Am Trying to Break Your Heart

The Long Incubation of the Incubus

When the New York stage company Collective Unconscious took transcripts of Cockpit Voice Recorder tapes from six real-life airline emergencies and performed them on stage under the title Charlie Victor Romeo, they created a theatrical sensation and a testament to the strength and spirit of humans in crisis.

The winners are in for the 28th annual B. Iden Payne Awards, honoring outstanding achievements in Austin theatre from August 2001 through July 2002.

Austin Musical Theatre's production of My Fair Lady serves up the tale of a Cockney flower girl's transformation at the hands of an egotistical phonetics professor with a lavish look and a playful spirit, creating a delightful dance of elegance and frivolity.

Pilgrimage to the Shrine of Saint Mary

For a concert in Austin, modern Houston-based music ensemble Istanpitta chose about a dozen medieval songs about the Virgin Mary and gave them a charming airing.

The Zachary Scott Theatre Center production of Claudia Shear's Dirty Blonde does not always work, but when it does -- such as any time Rosalie Teneth struts and curves and bends around the stage as Mae West -- the show embodies everything truly amazing about theatre.
columns

Leaving us no time to catch our breaths after the Austin City Limits, Pecan Street, and Cinematexas festivals, our little city is graced next with the Heart of Film Screenwriters Conference and Austin Film Festival, unofficially kicked off by a screening (co-sponsored by the Austin Film Society) of Jonathan Demme's new film, The Truth About Charlie.

Stephen takes you to the Emmy's and deems them not worthy of any particular awards. Plus, a local retail roundup and more!

The author offers notes for a poem that tells how the America of our hearts is a forgotten country.