The story of Texas history says a lot -- about the storytellers

In a recent analysis titled "What Renewable Energy Means to Texas," environmental groups announced they're whole-hog on board with the emerging renewable energy industry, especially wind power.

Civil rights advocates and opponents of the "war on drugs" were relieved by the announcement last week that state Attorney General and U.S. Senate candidate John Cornyn will initiate a probe into the notorious drug bust in the Panhandle town of Tulia. But is it too late?

I-35 expansion opponents from Eastside neighborhoods plan to apply for national historic area designation and promise to fight TxDOT along the way to salvage historic structures in their neighborhood.

Jurors spent much of week three of the yogurt shop murder trial of Michael Scott watching nearly 20 hours of an exhaustive videotaped confession he gave Austin police in September 1999.

Bottom of the Budget Barrel

City Hall scraped to the bone; now it cuts into it.

Keep Off the Grass

The Town That Tackled TxDOT

So What's Going on?

Cheney's call to war is as illegitimate as ever.

Is "neighborhood planning" the tool for the job Austin needs done?

The Y Bar & Grill's is a great place and has quite the popularity, but what about the food?

Virginia B. Wood says step right up to the "Food-o-File Event-o-Rama"!

Wes Marshall briefs you on four great red wines for under $10. 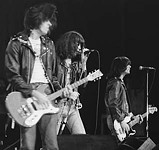 Too Tough To Die

The last surviving real Ramone takes us back to the best years of our lives.

Sugar on the Asphalt

Sparta, The Fall on Deaf Ears

Turn on the Bright Lights

(Backroom) Journeys With George (and James)

The Austin Film Society will be screening all-new 35mm prints in an eight-film retrospective of the work of Soviet filmmaker Alexander Dovzhenko.

The Poet as Filmmaker

The Films of Alexander Dovzhenko

Watch movies, make movies: It's all in a weekend's work at this year's Cinemakids program, an offshoot of the Cinematexas International Short Film Festival.

The skies still may not be all that friendly, but at least hanging out at in the airport terminal's gotten better.

Fall is falling … or rather, fall TV is falling into our laps. The question is, will it be as welcome as a purring li'l kitty cat digging in for a nap, or as rank as last week's bong water seeping in to your new chinos?

Ralph Bakshi, the animator behind Fritz the Cat, didn't invent rotoscoping, but he made it poetically epic with 1981's American Pop.

In this startling thriller, a mousy but frustrated office worker and an unrepentant thief pull off a heist that depends in equal measures on quick thinking and creative choreography.

The Austin Museum of Art's downtown home gets a shot in the arm, and local television devotes more attention to Austin's arts scene.

While remembering September 11, we owe it to ourselves to remember what its horrors have been shamelessly manipulated to obscure.

Vylette gets the Sex and the City nod from USA Today and we turn four! Happy Birthday to us!

I have now made it five years since breast cancer was diagnosed. I consider myself very fortunate and want to do everything I can to stay well and avoid future chemo. Where do I start?