The battle for Barton Springs has been a struggle over the soul of the city.

What will the Stratus deal mean for the Springs?

The Battle for the Springs: A Chronology

County Attorney Ken Oden has proposed a possible solution to the chronic overcrowding that has long plagued Travis Co. jails.

It's a Done Deal

The City Council approved the Stratus settlement 6-1. Now what?

Railroaded at Third and Lamar

Land of the Free?

The governor of Tocopilla, Chile, visited Austin last week as part of a nationwide survey of the American legal system.

Local NAACP leaders recently announced the results of their inquiry into the June shooting death of 23-year-old Sophia King, leveling much of the responsibility on the Housing Authority of the city of Austin.

Austin @ Large: Into the Gap

Bush keeps emphasizing the "shadow" in "shadow government" and Segway tries to push you off the sidewalk. From the Bistro to the Beard

Austinite Shawn Cirkiel makes a pilgrimage to the home of American gastronomy, the James Beard House in New York.

Virginia B. Wood has so much news in this week's "Food-o-File" that reading it too fast might give you indigestion. In a good way.

Kevin Fowler is among the brightest of the Young Texas rising stars. 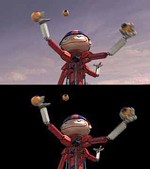 From digital derring-do to super sculpey miniatures, imagination turns into mind-blowing matter in Spy Kids 2: The Island of Lost Dreams

Robert Rodriguez took the idea of "buy local" to new extremes by recording the orchestral score at Georgetown High School.

"There are many days where it's, like, buy and save a super, super rare 1920s Harold Lloyd or Buster Keaton image, or buy some extra groceries … and saving their movie images always wins out."

This one's for the kiddies ...

Neverwinter Nights is more than a game, actually: It's a gaming system to be built on.

Fall in the air, fall on the air

Who is Cletis Tout?

Deep in the Mozart of Texas

This summer, the Austrian American Mozart Academy, an international program that provides aspiring professional singers with training and performance experience in Mozartian opera, relocates to, of all places, Austin, Texas.

The Texas Commission for the Arts gets a new executive director, the Blanton Museum of Art gets a new curator for its collection of Latin American art, and Toronto's Harbourfront Festival gets an Austin dance company.

It's rare for a piece of theatre staged in Austin to touch an issue close to the city's heart, and that immediacy by itself recommends bee luther-hatchee. But what makes the Zachary Scott Theatre Center production more worthy of attention is the skill with which it serves up the thorny issues authenticity of voice and artistic representation by people of different cultures.

Director Dave Steakley has assembled knockout performers for the Zachary Scott Theatre Center revival of HAIR, and he synthesizes their individual energies into an electrifying whole, but his valiant efforts to make the show's scope inclusive of our modern world fall short.
columns

A decade after SOS, we need to develop a realistic vision and useful political tools to address future development in the Barton Springs watershed.

Our Style Avatar get Grease-y and posh all in the same week!

I am nearing menopause and really worried about osteoporosis now that we know hormone replacements carry an increased risk of cancer and heart disease. What are the alternatives?

All the tumult, all the culture, all the relentless historical brouhaha, has not changed the irreducible loneliness that haunts us.

Coach's old Vail nemesis Cedrick Trout has jumped on the Redskins / Steve Spurrier bandwagon, but Coach figures he's at least a year or two early. And in college -- surprise, surprise -- UT's really as good as their hype