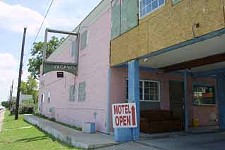 Life After a Night at the Rio

The Rio Motel is gone, but the memories linger.

When Lauren Ross urged the City Council to reject the "half-baked" Stratus development deal, council members' jaws dropped one by one.

The State Board of Education's first public hearing on social studies textbooks confirmed that, underneath the thin cloak of bureaucratic civility, an ideological battle is raging over whose story the textbooks should tell.

Jury selection is set to begin July 29 for round two of the infamous yogurt shop murder trials.

It's A Gas, Gas, Gas For Longhorn

Looks like the Longhorn Pipeline is about to begin pumping gas.

The Showdown at Sixth and Lamar

The falling Dow throws a spotlight on the president's business career.

Bush barks but barely bites, and MBNA buys a Congressman … on credit. 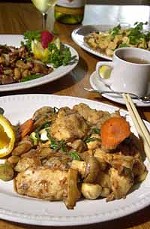 Wild Ginger, the reincarnation of Formosa, takes another chance at Chinese

Virginia B. Wood fixes her French, has her eyes rolled back in her head by a delightful new dessert, and reports on the latest cooking classes in session in this week's "Food-o-File."

Raoul Hernandez goes on tour with the Flatlanders

Hole is on hold, as is Abra Moore's new album, though American Analog Set may be dead and the Mercury's Hip Hop Humpday is definitely. Meanwhile, John Kunz fights back, and Don Imus raises the Flatlanders flag. Whew!

A Loose Affiliation of Saints and Sinners

Comedy Is a Man in Trouble: Slapstick in American Movies

The Girls in the Back Room: Looking at the Lesbian Bar

If imitation is the highest form of flattery, then sandwich chain Schlotzsky's is practically kissing Bob Sabiston's feet.

We Regret to Inform

Fame, a fictionalized but not entirely glamorized look at the High School for Performing Arts in New York, requires a complete suspension of belief, but once suspended, it's as easy to swallow as ice cream.

This is a wonderfully universal narrative based on oral tradition about the introduction of evil into a peaceful Inuit community.

Lowell Bartholomee has a lot to say, and he says it in plays that blaze like a Klieg instrument throwing gritty metrosphere of modern life into stark relief -- stark comic relief.

Every playwright needs a mouthpiece, an actor to communicate his vision to an audience, and Lowell Bartholomee has his in Robert Fisher.

UT-Austin's Blanton Museum of Art acquires one of the most comprehensive collections of prints ever assembled by a private individual: the Leo Steinberg Collection of 3,200 prints from the 15th through the 20th centuries.

In Kirk Smith's stage adaptation of Moby Dick, language comes forth in great waves, in storms of words, soaking our brains with images of the sea, of a white whale, and of a mad captain's pursuit of it, and while the Vortex Repertory Company Summer Youth Theatre production may not always convey every nuance of every line, it does communicate the feel of a life at sea, danger and dread, and the roles played by Destiny and Death.

Coyote on a Fence

Bruce Graham's Coyote on a Fence makes a strong political statement about the unfairness of capital punishment, but both the script and Real Rain Productions' staging of it are uneven, with choices that undercut the undeniable tension inherent in the dramatic situation of death row inmates.

Although several performers are excellent, the orchestra is good, and the Austin summer-night atmosphere is as laid-back and fun-loving as ever, Zilker Theatre Productions' staging of Into the Woods is fraught with problems, from technical glitches to set-design issues to actors' difficulties handling the musical demands of the show.
columns

The City Council should negotiate the Stratus deal from a position of strength; we remember the tragic life and brilliant filmmaking of indie pioneer Eagle Pennell.

Who was that scary cowboy and why was he doing those nasty things??? Stephen ventures out to yet another "alternative" fashion show. Will he ever learn?

Coach gets his disconnection notice, courtesy of Allen Iverson.

The Flatlanders' collective voice of experience still dares the odds and rings true.