"A Record of Dishonesty"

Allegations of improprieties against Wackenhut are not confined to Travis County.

Hundreds of citizens turn out to denounce the proposed Stratus deal.

Outdoor-loving Texans can thank the federal government for requiring the state to firm up its state parks planning over the next decade.

A judge rules in favor of an attorney who claims that APD engages in selective prosecution of officers. Attorney Steve Edwards now must collect evidence -- and his number one goal is to get Chief Stan Knee to testify.

The Whirl-Mart concept comes to Austin

In light of the shooting of Sophia King by an APD officer, Police Monitor Iris Jones discusses the role of her office with the community.

A Travis County grand jury returns a no-bill against the officer who shot Sophia King, but some people remain unsatisfied.

Barrientos implores Forgione and AISD not to drop its successful dropout prevention program.

Despite a wave of scandals, the State Board of Education approves licenses for new charter schools.

Sending Out an SOS: Can the Fractured Austin Polis Find a Common Future?

The Supreme Court, by supporting vouchers, removes another brick from the church-state wall.

Bush wants to spend your taxes on missile defense, but won't tell you if it works; and, WWJD -- What Would Jim Do?

Casey's New Orleans Snowballs, the little family business that could at 51st and Airport, packs a year's worth of fun and flavor into six months, writes the Chronicle's Rae Nadler-Olenick.

The New Taste of Chocolate: A Cultural & Natural History of Cacao With Recipes

Vegetables From Amaranth to Zucchini

Food Editor Virginia B. Wood says goodbye to Chronicle writer Rebecca Chastenet de Géry and hello to Claudia Alarcon and Erin Mosow, while still serving up the latest news in this week's "Food-o-File."

Erin Mosow knows where to go for the snow in this week's "Second Helpings."
music

The Hole in the Wall closes.

And the Surrounding Mountains

Soul Picnic: The Passion and Music of Laura Nyro

Are You Passionate
screens 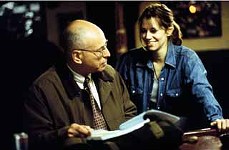 Happy Trails to You

How to Get the Government to Pay Attention, the Rotoscope Way

I Am the World Trade Organization ... Or Am I?

The WTO gets spiritualized in a carbon-copy hoax site.

Writer / director Tim McCanlies enthuses about his upcoming film, Secondhand Lions; plus, The Alamo gets a new scribe.

Based on an Elmore Leonard story, this 1957 Western is a compelling mix of conflicting principles between two men, a farmer and a murderer, who hold each other captive while waiting for the 3:10 train to Yuma.

Thirteen Conversations About One Thing

Several vignettes follow different characters as their lives interconnect in a search for happiness.
arts & culture

Invasion of the Kiddie-Lit Plays

The former bakery turned arts center on Tillery gets another tenant, Austin Musical Theatre gets an executive director, and Zachary Scott Theatre Center alums get plum acting gigs on opposite coasts.

For Different Stages' staging of The Unexpected Guest, director Johanna Whitmore has tried to bring Agatha Christie's 1930s English village mystery into a contemporary setting, but with the text still rooted in the phraseology and linguistic mannerisms of the past, the result is a stilted and, ultimately, wooden production.
columns

We change printers, resize the paper, and go to press a day early, all in the same week. At some point this must have seemed like a good plan.

The Style Avatar's Botox experiments -- and their eyebrow-raising results!

I have decided to start taking a multivitamin/mineral of some sort, but I don't want to waste money taking more than I need. How would I know if I am getting enough, but not too much, of a nutrient?

Coach ventures forth to a pre-dawn World Cup-watching party.