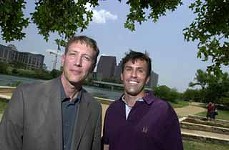 A Preview of Clean Energy Potential in Central Texas

The police shooting of a mentally ill East Austin woman has officers defending their actions and critics raising eyebrows.

Peter vs. Paul at AISD

Despite John Cornyn's jokes and the end of the Ruiz suit, Texas prisons still need reform.

The death of Sophia King was a tragedy waiting to happen.

In this week's "Food-o-File," Food Editor Virginia B. Wood tells us about Austin restaurants at a Fever Pitch, a Shack Attack, Asti's Farm to Table dinner, and much more.

Chronicle Food writer MM Pack makes it clear that while you might not be in and out of Doña Emilia's family-style Colombian restaurant in a hurry, it's definitely worth the wait.
music

The Last Waltz, Waiting on Columbus

Straight, No Chaser, Bird, Round Midnight

Rock On: Greatest Hits From the Observer Label, Money in My Pocket, Dennis Brown in Dub, Microphone Attack: Niney the Observer 1974-78, Head Shot: Reggae Instrumentals, Dubs and Other Oddities

Love Is Everything: The Jane Siberry Anthology

Coat of Many Cupboards

The Wide World Over, A Magical Gathering

Blizzard of Ozz, Diary of a Madman, Tribute Will Video Kill the Celluloid Star?

Most loves fade over time, and the romance of a hundred-plus years of filmmaking seems to be losing its luster as well. At least, that's what the new High Definition video vanguard, led by George Lucas and Robert Rodriguez, is saying. Is video the future of film?

Austinite Alana Cash screens two of her documentaries focusing on female scientists in a benefit screening for T.W.I.S.T. (Tomorrow's Women in Science and Technology Inc.).

Sure, its slacker characters incessantly dissect every little thing in circles and circles, harping on the most miniscule details of life and making the same old lame pop-culture references. But Kicking and Screaming rises above other comedies of the mid-Nineties Gen-X genre.

The Dangerous Lives of Altar Boys

"Master Harold" … and the boys

This Pro Arts Collective production of Athol Fugard's "Master Harold" … and the boys sneaks up on you, seeming mundane at the outset but in the end delivering a dramatic power that draws tears.

12 Steps to a More Dysfunctional Family

With 12 Steps to a More Dysfunctional Family, playwright-performer Rob Nash elevates the unhealthy sport of impersonating the members of one's family into a fulfilling art.
columns

The movement to replace traditional film stock with High Definition video is under way, and some notable local directors are leading the charge.

My thyroid test results vary a lot and don't seem to match the way I feel. My prescription for thyroid is usually 75 micrograms (mcg) per day, but sometimes down to 50 mcg/day or up to 88 mcg/day. Why would it vary and what is the best way to tell if my thyroid is OK?

Chronicle style avatar Stephen goes to some parties. So you weren't invited; shut up and come along anyway …

Tiger Woods is a great golfer, no doubt, but it's a shame there's no one else around who can really challenge him.