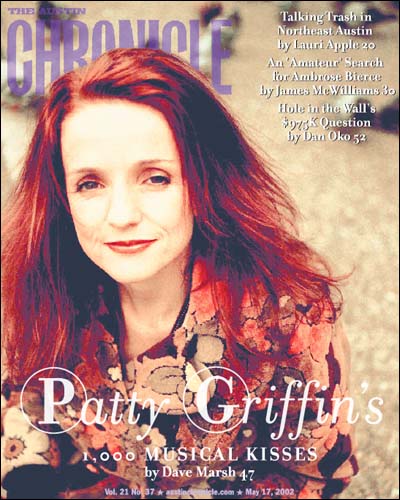 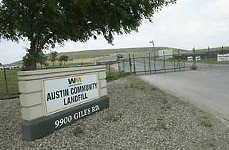 A huge garbage dump in northeast Travis County causes a stink with its neighbors.

Our endorsements for the 2002 ACC run-off elections

Not for the Birds

We're $68 million in the hole. What's council going to do about it?

Back to the Chalkboard?

The Long Arm of LBJ

Boys Will Be Hawks

Austin @ Large: Where Was Everybody?

The "invisible hand" of utility deregulation looks an awful lot like Ken Lay's.

Bush's policy toward democracy is loaded with irony; Corporate Big Brother is watching you shop; Our government legal robs us -- of our rights.

Even More Fish in the Sea

The second installment of our guide to sushi in Austin

The Hole in the Wall needs to dig itself out of one.

30 Days in the Hole Highlights

The Hummingbirds, Lost in the Lonesome Pines

Music About a Boy

Austin foley artist Buzz Moran strips the sound out of a forgotten kung fu flick and redubs it live at the Drafthouse. The result? Something to chop about it.

Get Your Game Face On

'Tis the season to glue yourself to the PlayStation controller and get in some batting practice.

SXSW and the Austin Cinemaker Co-op call for entries to their SXSW Trailer Fest competition.

Timed neatly with the premiere of George Lucas' latest Star Wars installment, Will Brooker's new pop-cult study of Star Wars fandom sheds some light on the dark side.

Music video maven Lance Myers stays up all night to animate the Riddlin' Kids' latest spin, plus pennies from heaven (or: the Texas Filmmakers Production Fund).

What, you think watching TV for a living is easy? Boy, does "TV Eye" have a thing or two to tell you.

This film is a sympathetic biopic about the troubled life of Nuyorican writer Miguel Piñero (author of Short Eyes). 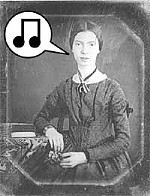 The Long Center for the Performing Arts is delayed until 2005, and MS / Nerve Dance Company and Jason Phelps hold a very personal benefit.

The thrill that comes from the bright, full, flashy, splashy sound of a brass band is the feeling you get from Austin Musical Theatre's production of Sweet Charity and to coin a phrase, how sweet it is.

With Rigoletto , Austin Lyric Opera once again executes in bold strokes a classic opera in the vaulting openness of the City Coliseum, with director Joseph McClain again showing a flair for the theatrical and finding a degree of intimacy in that vast space.

The Rude Mechs took a road trip to see the Marfa lights, and their journey has been translated by playwright Kirk Lynn, director Shawn Sides, and a gifted ensemble into a raucous, sweet, funny, fanciful meditation on the tension between desire and intellect, and heaven as embodied in the land called Texas.
columns

Dave Marsh is a writer of passionate convictions whose work is designed for engagement. Which is why we're excited that he wrote our cover story on as great a talent as Patty Griffin.

Hmmmmmm, didn't our Style Avatar's psychic "see" what awaited him at the Brown Bar? Why was he not forewarned? Also, AAF checks in on George Michael's potty habits.

All my life I have really loved milk, but my wife is concerned that it is making me gain weight. At age 30 I am otherwise healthy but about 20% over my ideal weight. Would two glasses of milk per day be too much?

Ale, ale, ale, ale! The World Cup starts in two weeks! Plus a look at the basketball and hockey playoffs so far.

A fantasist's view of the rise of monotheism.