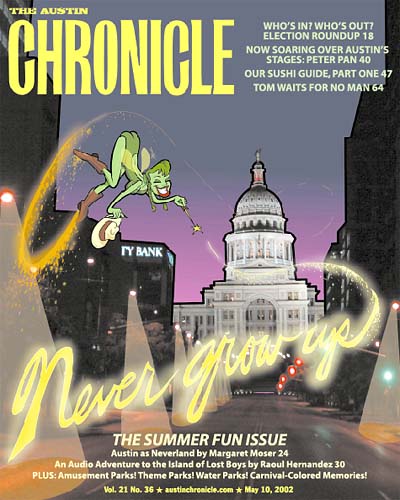 Austin is a town that brings out the "lost boy" in everyone.

Stories from the Midway

A Pox Upon Her

Fun Without the Family

Place 4: How Many Negatives Make a Positive?

No Props Given To Major Props

Did Anti-Prop. 1 Jump the Ethical Gun?

Forgione takes his Blueprint on the road, but is everyone buying?

Not Saving the Salamander

When Is a Threat Not a Threat?

Was this election the end of an era?

In the battle of the budget, the weakest go to the wall.

The Smithsonian gets sold to the highest bidder; a tiny university builds a first-rate baseball stadium; and a common weed killer plays havoc with Mother Nature.

All the Fish in the Sea

Part one of our guide to Austin's proliferating sushi spots.

We survey some of Austin's Indian restaurants in this week's "Second Helpings."
music

Facing accusations of market saturation, cultural homogenization, and unethical labor practices, Disney keeps manufacturing the magic … but for how long?

A Grouse With the Mouse

How Disney made a lesser duck out of Howard

The Vault Disney collection dusts off kid classics from its golden era of live-action films. They still fit -- and beautifully.

Put the kids' summer to good use by taking them to camp, where they learn how to make television, not watch it.

The third coast heads over to the West Coast for the Sixth Annual University of Texas at Austin Student Film Showcase, and in case you can't afford to fly out for the big shindig, they'll be screening the student works free at the Alamo Drafthouse Downtown. Crafty.

Summer fun, air-conditioned and remote-controlled: The Discovery Channel airs a triptych of roller coaster specials, and Buffy fans can get their jollies in book form.

The Tolkein / D&D brand of sword & sorcery common in Lloyd Alexander's classic Chronicles of Prydain was a bit dark for the Disney set, but the Mouse factory went ahead and made The Black Cauldron anyway. Too bad they Disneyfied it to death.

A Shot at Glory

A certain boy whose permanent address is Neverland has been buzzing Austin quite a bit this spring, and here are some thoughts on why Peter Pan is so much in the air these days.

A grand operatic production of Turnadot by the Chinese National Opera has been canceled, playwright C. Denby Swanson receives a McKnight Advancement Grant, Davy Crockett gets caught in the Web, and Peter Pan receives his own Amy's Ice Cream flavor.

In The Kindermann Depiction, Physical Plant Theater's Steve Moore and director Carlos Trevino have created two worlds, one flooded with leaves, one made of cloth, that are full of strange wonders. We wouldn't want to live there; but our lives are much enriched by having paid a visit.

In the Second Youth Family Theatre production of the Maurice Sendak-Carole King musical Really Rosie, a cast of young performers brings a gang of rowdy Brooklyn kids to life with a spark and sass that suits their streetwise scrappiness and executes the show's musical numbers with the polish of much more experienced stage performers.
columns

Saturday's election results show that election reform isn't necessary when you have a thoughtful electorate.

Wait a polyester minute! What is our Style Avatar doing in Sugar's, the Showpalace, and Exposé??? You'll just have to read to find out. Thank goodness Lucinda's also in there to soften the blow!

After my last Pap test, which came out mildly abnormal, I "spotted" for several days. My doctor's nurse told me not to worry and I finally did have a normal menstrual period. Why would that happen, and is it worrisome?

Coach is a proud papa; his son Adam graduated from college last week.