Forgione's new blueprint attracts critics who worry it will mean the end of the dual language program.

War: Made in Texas?

Is There an Actor in the House?

Wimberley: City or Not?

Coming to a PC Near You!

The Lege attempt at air pollution control gets shot down in court.

The Chieftains of the Green Tribe need to remember that City Council represents all Austinites.

The Taste of Mexico

Texas on the Plate

The Napa Vintner's Association benefit for Any Baby Can 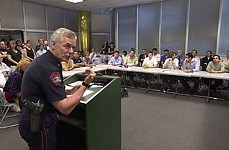 Andy Langer examines round one of trying to establish a new city noise ordinance for Austin.

Cee-lo Green and His Perfect Imperfections, Watermelon, Chicken & Gritz, The Trials and Tribulations of Russell Jones, Rewind!, In Search of…, Blazing Arrow

In promotion of his new film 'Hollywood Ending,' reluctant traveler Woody Allen appeared briefly in Austin to talk bats, barbecue, and why he'll never go back to stand-up.

Better Git Hit in Your Soul

Former Austinite George Ratliff returns to town with his new documentary, Hell House, which explores the Trinity Church's way of converting teens to Christ -- by scaring the pants off them.

The Sights and Sounds of Art in Sync

Ron Mann's jazz avant-garde exploration Imagine the Sound provides the perfect counterpoint to Austin Eye+Ear (which will screen Mann's film this Sunday in an E+E benefit): Both are bent on the blurring of artistic lines.

The Austin film community appears ready to rumble as the Austin Film Office (under the aegis of the Austin Convention and Visitors Bureau) files suit against the Austin Film Commission, whose name and mission statement the AFO thinks is too close for comfort.

Technology is making great strides in the development of interactive TV. Now when are TV execs going to start paying attention?

1982's Friday the 13th Part 3 holds a special place in the hearts of fans: It's schlocky and stupid, yet somehow scary, it's goofy, yet often gory, and it explains the origin of Jason's signature facewear.

The horoscope of a young woman (Amélie's Tautou) predicts that love is just around the corner.

Although the serial killer Jason has been cryogenically frozen at the start of this 10th outing, the hockey-masked one ends up defrosting on a spaceship in the year 2455.

Son of the Bride

In this Argentinean film, a single dad and businessman struggles to keep his personal life afloat while undergoing a midlife crisis.
arts & culture 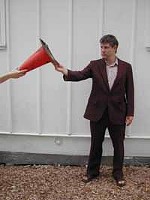 Deborah Hay forges her own answer to the issue of how one keeps choreography alive beyond one's own physical and mortal limitations with Nine Nights of Music in May, in which her solo "Music" is performed and adapted by four diverse artists.

Endorsements are a pain, but we think they are also a service to our readers.

The gargoyles guarding the great cathedrals are a part of religion, a part of humanity, even a part of God. You come to be redeemed, but it's possible you'll be devoured.

My thighs look like orange peel! I've seen this on older women, but I am only 28. My friends call it cellulite, so what is cellulite and more important, how do I make it go away?

There's no lack of fashion at Groopie; hair online; Marcy gets well soon, and another José Eber sighting. All inside!