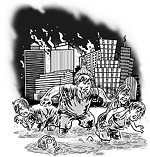 Now that the lawsuits are over, we hope the council campaigns will turn to issues.

A rundown of the upcoming Austin City Council election

Notes of an Old Leftist

Lone Star liberal Dave Richards releases his memoir at the Scholz Garten to much fanfare.

Great Streets, Not So Great Parks

Battle at the park over Riverside Drive

Military Out of Mabry?

A West Austin resident says moving the Texas National Guard out of Camp Mabry would be better for both the neighborhood and military.

Everyone in Texas wants better schools, but no one wants to pay the tab.

If Mueller is a model, then why wasn't it followed with the Villas?

Dubya will save us from pollution -- with gas masks; polluters get "greenwashing" awards; the Cardinals pitch St. Louis a screwball.

Though it doesn't make it into the paper, we do get a fair amount of correspondence via phone, e-mail, or snail mail in which readers air their complaints about experiences in local restaurants. We don't print it because it's Chronicle policy not to take a position on business complaints about incidents we didn't witness and can't substantiate, but it does make for very interesting reading. It was certainly food for thought in the development of this special Chronicle pop quiz. 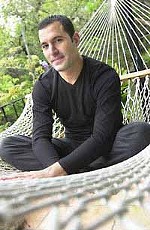 D: Fuse, one of the world's biggest emerging DJs, hails from A-town.

Women, Scene but Not Heard

... And You Will Know Us By the Trail of Dead

All Relationships Are Doomed to Fail

Then Came the Night

Live in the Chapel, 5 Popes
screens

Been Around the World

Cine las Americas enters its fifth year as the premier festival of Latino filmmaking … only they're not calling it "Latino" anymore.

The Weakness of the Flesh

Actor Bill Paxton gets behind the camera for his directorial debut, the Texas gothic terror tale, Frailty.

Something to Talk About

A/V Geek Skip Elsheimer is a curator of a certain brand of pop-culture ephemera: the forgotten "educational" film.

It's a moviehouse melee as a rumored three more suitors enter into the Great Hills 8 bidding war.

Disappointingly, Julia Louis-Dreyfus' new sitcom didn't prove self-fulfilling -- no one is watching Watching Ellie. "TV Eye" explains why you should.

The Secret History of Tuna

Tuna isn't the only Texas town with which actor-writers Jaston Williams and Joe Sears can be closely identified. Austin has played a significant role in the development of their town, and in return Sears and Williams have changed the face of the capital city.

A Tuna Almanac: Facts About the Shows and Their Creators

Facts about the Tuna shows and their creators, and a guide to the characters in the plays.

Who's Who in Tuna

Local sculptor Damian Priour talks about being Featured Artist for one of the city's rites of spring: the Austin Fine Arts Festival.

Boys will be boys -- especially if they're brothers and they're written by Sam Shepard. And this offering of True West from 4th &1 does a damned fine job of showing us what that means.

David Douglas Duncan inaugurated the David Douglas Duncan Endowed Lecture Series in Photojournalism by talking about his dog Yo-Yo, a small terrier, and providing the audience with an intimate and entertaining slide show from one of the world's master photographers.

Blade to the Heat

The Nushank Theater Collective produces a cast of powerful performers for its production of Oliver Mayer's glove love drama Blade to the Heat.

Director Johanna McKeon opens her UT Department of Theatre & Dance staging of As You Like It in a court of stylish bleakness, but when she moves it to the Forest of Arden, spring permeates the production and a buzzing, exuberant spirit takes over.
columns

Like all morality-based movements designed to eat away at our most basic freedoms, term limits and campaign finance reform are inherently anti-democratic.

Is earwax supposed to be dry or sticky? Mine seems to be too dry and is hard to remove. Is there a remedy other than having a doctor remove it?

San Antonio and Dallas are two of the best teams in pro basketball. Their meeting this weekend was just a preview of a playoff showdown.