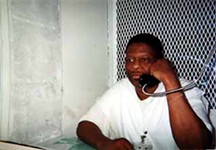 Serious questions remain about the state's case against Rodney Reed for the murder of Stacey Stites.

A profile of David Fisher, volunteer sleuth in the Rodney Reed murder case

A roundup of primary races important to the Austin area

Fresh Plus -- Minus Dave

Letters between governmental groups show that Bush's "unvarnished advice" was not coming from anyone interested in clean air.

A downtown landowner continues his fight to keep the city from condemning his property.

The Charter, Again, Part I

Questions for Tony and Dan

The Pentagon lies to us … and unashamedly admits it; Global Crossing investors and employees get Enronized; New York City whores its parks to the highest bidder.

'Pizza ... Any Way You Slice It!' at the Austin Children's Museum

Chronicle Food writer MM Pack gives the lowdown on where to eat in Austin if you're out all night.

Food Editor Virginia B. Wood has had correspondence from several of the most tasteful men in Austin's food scene in the past week and it's all good news.

A panoply of smoothie connections in this week's "Second Helpings."
music

The Cliques that Were Picked

From Here On In

First-time director Alexandra Pelosi discusses Journeys With George, her surprising and fascinating documentary on George W. Bush's 2000 presidential campaign, viewed from the back of the press plane.

Information Wants to Be Worthless

Money was never the most interesting thing about the Internet. Which is a good thing, since now it's gone.

A symbiotic relationship between socially conscious high tech professionals and community causes is becoming increasingly common, and a few Austin social entrepreneurs are leading the charge.

Too Tough to Die

Behind the Web Site That Works

The crude charms of Heavy.com.

SXSW Interactive features two contests to determine the geekiest of them all: The Iron Webmaster Showdown and the Sexiest Geek Alive.

The legendary Peter Bogdanovich discusses his latest film, The Cat's Meow, about a hush-hush Hearst scandal of long ago.

The Dukes of URL

Web sites have their eyes on the prize -- SXSW Interactive's Earl Awards.

Are you a Survivor? That's what 300-some Central Texans wanted to know when they auditioned for the CBS reality show.

It Should Happen to You

Judy Holliday's expertly hilarious It Should Happen to You was created when the idea that someone could be famous for doing absolutely nothing at all was still novel and strange. 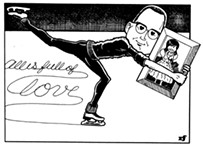 You Made Me Love You

What is this thing called crush? Specifically, what makes us swoon over people we've never met? The creative minds at the Blue Theater have gathered over two dozen actors, musicians, artists, writers, and puppeteers to create art, wall-writing, and short performance pieces to address that very question in Celebrity Crush.

Law and Other Performing Arts

The hottest arts venue in Austin this week may well be the UT Law School, where internationally renowned cultural figures, local arts luminaries, and prominent legal experts are converging there for a symposium on law and the performing arts.

The Salvage Vanguard Theater production of Caridad Svich's Fugitive Pieces is a nowhere road reminiscent of the Tom Waits milieu, with vagabonds hopping trains to anywhere other than where they are now. But while it's not for everyone, it's worth the journey.

Once on This Island

Lynn Ahrens' and Steven Flaherty's musical Once on This Island has a fairy tale feel, but director-choreographer Kevin Archambault can't always get the large-student cast of this St. Edward's University production to bring its colorful, swirling world to magical life.

The Austin Symphony's performance of the program Conception of Fate, with its works by Mozart, Brahms, and Beethoven, melded craft and style into a profound, spirited, joyful night of art.
columns

Even a lot of memorializing would not have been enough to pay tribute to Waylon Jennings, who had a profound and spiritual impact on Austin and its music; the Austin Music Awards will feature a salute to Ray Benson; our preview coverage of SXSW Interactive and Film gets under way with a tech-centric meditation by Bruce Sterling and an interview with Journeys With George director Alexandra Pelosi.

Your Style Avatar asks, "What's black & white and splooged all over …???" And keep your eyes peeled locally, kids, in the next few weeks, Austin becomes celebrity central.

Travel is no fun any longer because of motion sickness. With vacation approaching I would like to head off this problem for my whole family. Where do I start?

Coach's new dog, Jasper, is a joy. So was the Canadian gold medal in men's hockey.