A preview of the Charter Revisions Proposals

Living by the Line

People who live by the Longhorn Pipeline fight to keep the gas turned off.

A report on the African-American Legislative Summit

David (and Jesus) vs. Goliath

The city alleges that Time Warner Cable is offering illegal discounts to snuff out competition.

This Week in Council ...

Coming to terms: The limited wisdom of term limits

John Sharp would balance the budget by cutting Medicaid.

Brazil's indigenous people battle corporate biopirates; the Bush appointee calendar is 12 months of ugly; and the Century Club lets in the riff-raff. 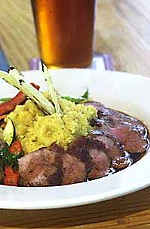 Don't sweat it trying to create the perfect mating of beer and food, Chronicle Food writer Wes Marshall writes in a review of North by Northwest Restaurant & Brewery. Pick a drink you like, pick a dish you like, and just enjoy them.

How Virginia B. Wood joined the Local Yokel Coalition and a chance to meet Bill Jamison and Cheryl Alter Jamison, the authors of A Real American Breakfast: The Best Meal of the Day, Any Time of Day.

The Bottle Rockets cut one helluva tribute to Doug Sahm.

Breaking Down the Barricades

Neil Diamond comes to town, the Metro stays open, Cotton Mather searches for a deal, Hamstein sells its publishing, Wynton Marsalis visits the Elephant Room, and much, much more.

Independence Day at the 710

SXSW Goes to the Movies

Nude on the Moon Television fans who organize to keep their favorite shows on the air, or even don the occasional Star Fleet Commanding Officer's uniform, are often depicted as lonely losers with too much time on their hands. According to TV columnist Belinda Acosta, the truth is quite the opposite.

The Arbor gets the axe from Simon Property Group.

Memo to America: The Olympics aren't about one, but all.

Sydney Yeager's new paintings at D Berman Gallery represent a departure in the artist's work, a potential turning point from the figurative images that made Yeager's work recognizable for nearly a decade to what has always been the real strength of her paintings: the abstraction beneath.

The Basics, With Bogart

The Austin Arts Commission defuses a community controversy by restarting the process of selecting public art for the soon-to-be-expanded George Washington Carver Museum and Library.

Onstage Theatre Company's production of The Gin Game manages to do justice to D.L. Coburn's 1978 Pulitzer Prize-winning drama, taking two people who sit around playing cards and holding our attention for the better part of two hours.

Una Panthera: Music from the Trecento and Early Renaissance Italy

In Una Panthera: Music from the Trecento and Early Renaissance Italy, a concert of love songs from 14th-century Europe presented as part of the 2002 Mid-Winter Festival of Music, exquisite pain and longing were brought to exquisite life in the enrapturing voices and instruments of Texas Early Music Project singers and musicians.
columns

Single-member districts would wrest control of the City Council from the residents of heavy-voting, progressive / environmental Central Austin, but would not be a quick fix for any of the civic problems currently laid, somewhat inaccurately, at the feet of the current council.

I stopped eating nuts a few years ago when I found out about aflatoxins, but now I am hearing more about nuts being good for us. Should I reconsider?

Coach pretty much stays out of political discussions these days -- but did you catch our president at the Olympics the other night? What a doofus!