Something Short of Miraculous

Months in the making, the city's plan to maintain reproductive services at Brack still raises questions.

Austin has the fifth-highest rate of traffic fatalities in the nation, according to a highway lobbyist organization.

More controversy over the selection of the city's police monitor

Controversy over the environmental record of Rainbow Materials Inc. costs the company a renewal of its city projects contract.

Council's first menu of the year.

The LCRA has been a welcoming refuge for former city officials.

Jesus Garza goes out on top, but not necessarily to universal acclaim.

Bill Clinton won't go away; a Harvard economist says you're poor because you deserve to be; Charles Schwab needs taxpayer help … to hunt ducks. 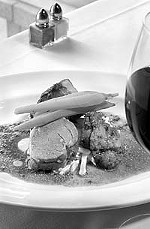 Changing of the Guard

"It's good food, well prepared, reasonably priced, straight up, no frills. I like it," Food Editor Virginia B. Wood reveals about young chef Shawn Cirkiel's cuisine at Jean-Luc's Bistro.

Goddess in the Doorway

Narcocorrido: A Journey into the Music of Drugs, Guns, and Guerrillas Love Is a Battlefield

Coming Out From the Cold

Wake up, and smell the heaping accolades on Richard Linklater.

Another day, another blah awards show

The servants know all in this Altman mystery set in a British countryside estate in the Thirties.

25 Minutes and Nothing to Lose

Onstage, as in life, the impulse to be adventurous is often curbed by Practical Concerns, but FronteraFest is a performance jamboree that gives artists the freedom to go for broke.

Music to Chortle By

Whenever Steve Saugey and Lyova Rosanoff are at the keyboards, musical shenanigans are the natural order, especially when these two pianist-parodists are spoofing classical music through one of their Forbidden Classics programs.

Ballet Austin's presentation of A Midsummer Night's Dream at the Kennedy Center in Washington, DC enjoyed sell-out crowds, enthusiastic responses, and a glowing review in the Washington Post.

Judging resigning City Manager Jesus Garza's performance in a difficult job will take some time; XLent's recent cover controversy brings back memories and reminds us how cool talk radio is; screwball comedies were the funniest movies ever, and the Austin Film Society is showing eight of them in the next two months.

Michael Ventura weighs in with his Top 5 list of 2001's best film and television moments.

Your Style Avatar tells us about how Winona Ryder's troubles just won't go away.

For years my periods have been getting worse, but I'm afraid if I go to the doctor he would find endometriosis, and I don't want to use hormones. Are there any alternatives?

Coach on the couch: A long, dreary series of bowl games is a lousy way to start the new year, isn't it?