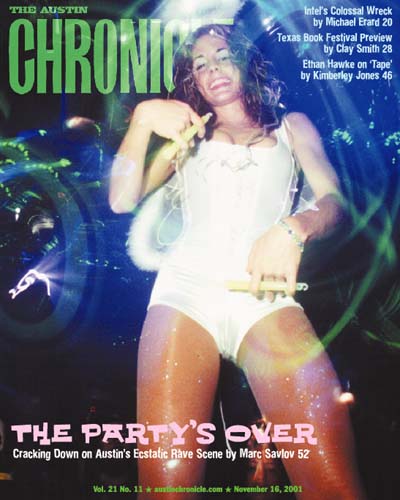 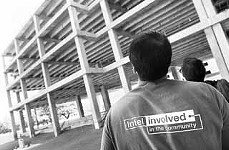 The Intel Building and its discontents

The Best-Laid Plans: Some of Intel's Unfinished Projects

The newly formed Save South Congress Association aims to put the brakes on light rail's return.

The Dawson Neighborhood plan was the first out of the gate, but now could be in danger of failing.

The latest salvos in the Georgetown Smackdown

The Villas on Guadalupe goes back to the drawing board.

On the Palmer Line

Would David Dewhurst really know a terrorist if he saw one?

Can the new Green Council earn a mandate? 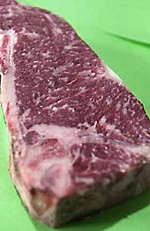 Virginia B. Wood recounts the Chronicle's Eat Drink Watch Movies event for those who couldn't attend and divulges the latest culinary news in Austin. 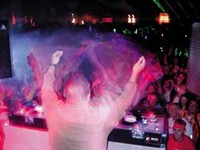 The Agony of the Ecstasy

Will the federal and local crackdown on ecstasy put raves out of business?

Are You With Me?, Haunted Gardenias

Presents for the Present 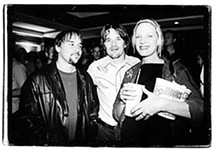 E Is for Everything

Playing With the Big Boys

Set in the summer of 1963, this coming-of-age film about four Southern girls is nothing less than enchanting.

Why not get happy? Why not celebrate love, and little twists of fate, and a sepia-in-Technicolor portrait of Paris? Amélie's heart is in the right place – squarely on its sleeve. And what better place for it?

Harry Potter and the Sorcerer’s Stone

From the sets to the story to the whole tone of the film, this first Potter film is an almost literal adaptation of J.K. Rowling's beloved children's book.

Tape is a confined microcosm: three characters, one room, and a whole lot of head-trippery. Old high school friends reunite years later in a dingy Michigan motel room for a night of tricky revelations. 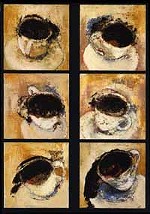 The times being what they are, you don't exactly expect to see new galleries sprouting across Austin's cultural landscape, but two just did: Oswald Gallery, showing fine art photography, and Jean-Marc Fray, displaying paintings by French artist Robert Bourasseau.

Lanford Wilson's Burn This is a fierce, realistic drama about art and relationships, and Alchemy Works delivers a very human production, deeply felt and nearly flawless in its presentation.

Ann Hampton Callaway proved a wise choice to inaugurate the new Austin Cabaret Theatre. Her clear enthusiasm for the Great American Songbook and impassioned, intoxicating performances of selections from it made cabaret intimate, immediate, a real event.

Second Youth Family Theatre's production of The Hobbit offers much that is magical, but awkward staging and inexperienced actors keep the show from achieving true enchantment.
columns

Austin music clubs are usually one of the first casualties in an economic downturn.

Defense against one's enemies presents a conflict for individuals who identify themselves as members of a Christian society instructed to turn the other cheek.

At the Wiseman House in Hico, Kevin Wenzel serves up some of the finest chocolates in Texas.

Guess who your Style Avatar flitted around town with this week? Check out this first installment about international salon god José Eber's visit to Austin.

I'm "paying my dues" taking vitamins, exercising, and sticking to a low-fat and low-cholesterol diet, but my serum cholesterol still hovers around 240, and my HDL cholesterol won't go over about 40. My triglycerides and LDL cholesterol are OK. What more could I do to improve those other two numbers?

The gauntlet is thrown: Major League Baseball is discussing "contraction." It's the Players vs. the Owners, and guess who's going to lose? The Fans, of course.