The Austin Chronicle endorses Gus Garcia for mayor of Austin and offers other endorsements on the Nov. 6 state constitutional amendments election and county bond propositions.

Henry Cisneros, Gonzalo Barrientos, and other politicos try to get out the vote for mayoral candidate Gus Garcia.

How Few Can We Be?

The latest solution to the Brackenridge reproductive services crisis collapses.

Standing on Opposite Sides of the Road Bonds

We Vote Where We Shop

Davis vs. the Dumps

Nike does the right thing -- when it's forced to; Monsanto monkeys with Mexico's corn supply; the San Antonio Spurs and SBC stick it to taxpayers. You may have noticed the neon deco sign on the roof of the Adams Extract Company's distinctively low-slung Moderne building, set back from I-35 just south of Slaughter Lane and rather dramatically surrounded by prairie grassland. What you might not know, Food writer MM Pack explains, is that, unlike Betty Crocker, there really is a Mr. Adams and he still makes the extracts from top-secret family formulas.

Virginia B. Wood on this week's events and news in Austin's culinary life 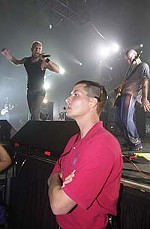 Chillin' with a trio of Austin's hippest emergency-services personnel

Already crossing the desk before Halloween has finished howling...

Let It Come Down

Since I Left You 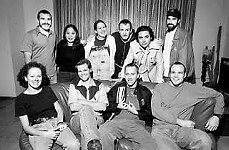 Six (Not So) Easy Pieces

Eight local filmmakers team up to shoot DV shorts in and about Austin.

A new AFS series highlights the little-seen films of the Soviet New Wave.

Cinemaker Co-op says bring on the healing, and classes galore.

The Drunken Driver Has the Right of Way: Poems

Life as a House

The Man Who Wasn't There

The story is rife with the Coens' ripe ambivalence, a black seriocomic opera of fouled-up American dreams, and a meditation on ambivalence that is itself often as ambiguous as the emotional meanderings of its protagonist, a small-town barber. The film's black-and-white image processing is stunning.

Spoof of old summer-camp sexcapades is performed by a sprawling cast of comedic hams, largely culled from comedy troupe the State.
arts & culture Santa scholar Carl Anderson talks about the role of Kris Kringle in a time of grief and fear.

In bringing Stephen King's Misery to the stage, the Zachary Scott Theatre Center production paint the story's characters in the most awkward fashion possible and mixes horror and comedy to a degree that's confusing.

Having sat through a Tom Stoppard play, there comes the feeling that a return visit is required to better appreciate all his linguistic, historical, scientific, sexual, comedic, and theatrical flourishes. The Austin Playhouse production of Arcadia, featuring one of the best ensembles to be seen on an Austin stage, may, indeed, warrant repeat visits to fully enjoy its efforts.

For its new production of Romeo and Juliet, Stephen Mills and a gifted company delivered the eloquence with which Shakespeare described the couple's profound passion -- without ever using the Bard's words.
columns

Gus Garcia is not simply the best choice for mayor on this slate but the best choice for mayor, regardless; Austin needs roads, but the road propositions that go before the electorate Tuesday are bad politics; the war in Afghanistan is a terrible misstep that played into the terrorists' hands and will have devastating consequences for our community; the Chronicle co-sponsored "Eat Drink Watch Movies" series starts Thursday.

Our own little Gaza Strip, and the Halloween (Gas) Mask is taken to task.

Sometime in the wee hours of September 12, George W. Bush realized that he is the President of United States and rose from his previous ineffectuality to meet the occasion.

Shadows on the wall of your mind's fleeting cave

Your Style Avatar revels in his New York state of mind, having just visited our noble Big Apple. Come along for the ride.

The Amon Carter Museum has a new, modern look, but it's still the same old great place to get culture.

I started taking a mushroom extract a few months ago on the recommendation of a friend, and I do feel better. What is in there that could make a difference?

Coach's pre-season glance at the NBA: the Spurs are overrated and on their way down; Michael Jordan is overrated and already down; but the real season doesn't stat for another half-year anyway, so does anyone really care?