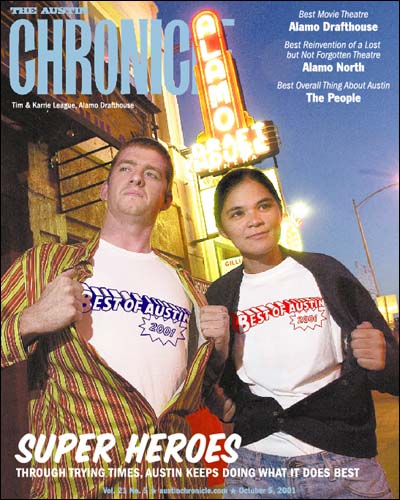 ON THE COVER:
Best of Austin 2001
features

Statesman Falls Off Its Bike

Statesman bungles a report about a local traffic incident

Some Time-Killers Do Matter

On a Short Lease

Georgetown city council members fight citizen initiatives to recall them and their ordinances.

An advocate for the Charleston Five seeks support in Austin.

The Statesman twists Orwell's words in a most Orwellian fashion.

The wise aftermath of Smart Growth

Pols play musical chairs -- to their own accompaniment 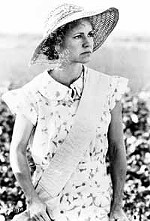 An endearing romantic daydream about an underappreciated housewife who decides on whim to not return home.

Our "Best of Austin" 2001 recognizes some heroes of daily life; the Chronicle celebrates its 20th anniversary with a number of upcoming special events.

As events unfolded on September 11, it became difficult to overcome the impression that no one was in charge.

The Best of "Day Trips"

My child can no longer play soccer on his team because he developed "exercise-induced asthma." My grandfather died of asthma more than 50 years ago. Could my child die from this condition? How can I help him?

Political correctness be damned -- it's not unpatriotic, or disrespectful, to continue to recognize the everyday heroism that's all around us … even on the sporting field.