The remarkable turnaround of the city's Housing Authority

Would You, Could You Be My Neighbor?

The city's "hospital within a hospital" plan for reproductive services at Brack fails to satisfy.

A UT grad is arrested in Jerusalem for peacefully opposing Israel's seizure of a Palestinian building.

A Candle for Arnold

The Statesman's Coverage of the Lacresha Murray case

Just as if we'd ordered it that way, another year of fabulous hot sauce festivities drew to a close, the sunbleached crowds left Waterloo Park, and then the skies opened up.

Two high-profile Austin food-related businesses sold in August, and now both will experience growth and expansion as a result of investor cash infusions, Cuisines Editor Virginia B. Wood writes. 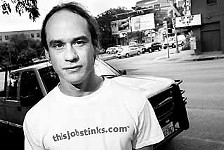 The local music community holds its breath as it waits for the music-industry target-study set to go before the City Council's budget meetings.

The Owls, Ghosts and Vodka

Been Here and Gone

Plastic Surgery Disasters, In God We Trust, Inc., Give Me Convenience or Give Me Death, Frankenchrist, Mutiny on the Bay, Bedtime for Democracy
screens

Call It a Draw

Last year's eye-catching Earthlink commercials imitated local animator Bob Sabiston's -- and his software's -- style. A little too much, in his opinion.

The Gleaners and I

The Deep End of Laughter

The Yards works well as an homage to Mean Streets-era Seventies crime movies, but the film's maddening problems with pace and dialogue make it a less enjoyable viewing experience than it could be.

Road to Nashville is a wonderful snapshot of what Nashville was like in the years before all the Shania Twains and Tim McGraws of the world took things over.

Adapted for film from the off-Broadway musical hit, this movie is a rousing screen spectacle about a surgically botched transsexual from East Germany (played charismatically by John Cameron Mitchell, the show's creator and film director).

Love will get you when you least expect it. So it goes in Charles Mee's Big Love, a vigorous update of the ancient Greek drama The Suppliants, and so it went when the Rude Mechanicals theatre company saw the play. They fell unexpectedly and unabashedly head over heels for it and are staging it now in what they describe as "a huge love affair."

Four months after using a new guideline to declare Sharir + Bustamante Danceworks ineligible for city arts funding, threatening the company's survival and sparking community concern, the Austin Arts Commission reversed course and cleared the way for the company to receive money from the city.

The Chron's about to turn 20! Louis Black illuminates the recent changes in our Politics staff.

This is the last Public Notice ever.

We're all in trouble, along with Vanessa Leggett, if the governement begins defining who is and who is not a true journalist.

Our Style Avatar charts a plethora of moving and shaking in the local scene.

I have a 10-year-old son by a previous marriage, but after trying for six years, it looks like my husband may not be able to father a child. We simply cannot afford the cost of the entire batch of medical tests and treatment that insurance will not cover. What could nutritional supplements do to help?

On a drive through the Hill Country and up to West Texas, Coach falls in love with the land all over again.