What makes the Dr Pepper in Dublin, Texas, so much better than that made anywhere else?

A state program that enables offenders and their victims meet face-to-face has helped Andrew Papke take full responsibility for the drunken driving-related deaths of Beth Early and Daniel London.

The letters of Martha Early and Andrew Papke

A Summary of the Victim Offender Mediation Process

Round Up the Usual Suspects

Cap Metro tries to re-make its image, Beverly Griffith considers her options, and the budget strains

Will Sixth Street Recycles come to an unhappy end?

Cornyn's health-care opinion is neither compassionate nor conservative.

A Primer on Peppers

Austin's own Pepper Lady, hot sauces around the globe, and what to swallow when your throat's on fire.

The Fire Behind the 'Austin Chronicle' Hot Sauce Festival

Hot Sauces Around the World

Yes, Texas chileheads, your favorite time of year has arrived! Cuisines Editor Virginia B. Wood has the scoop on festival regulars and the upcoming chile activities in town.

A guide to Austin restaurants that have won awards in previous Austin Chronicle Hot Sauce Contests. 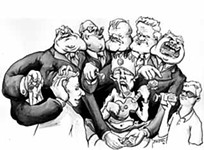 Does having your music free online bring more or less cash?

What if Napster went offshore?

A conversation with Nick Doob, co-director of 'Down From the Mountain,' a new documentary about the musicians behind the soundtrack behind 'O Brother, Where Art Thou?'

Tales from the Tarantino trenches

When Liz is good, she's very, very good, but when she's bad, she gives it all she's got.

Debra Winger plays a federal agent on the tail of a chameleon-like young woman (Theresa Russell) who marries wealthy men and then kills them.

The Curse of the Jade Scorpion

Brilliant portrait of teen anomie is based on the underground comic book by Daniel Clowes.

Jay and Silent Bob Strike Back

Smith turns his stoner Greek chorus into leading men on a mission.

A Bad Year Gets Worse

The Austin Arts Commission has found itself stewing in a bubbling gumbo of controversies this year, and lately that gumbo has been getting hotter and hotter, with resignations from the Commission, an investigation by the Texas Commission on the Arts, and a call for reforms by a City Council member.

It may still be too hot to frolic in the noonday sun, but it's not too hot to put on a show to help someone in need, and that's what a number of Austin artists are up to this month, raising funds for flood victims in Houston and an Austin musician with a spinal cord injury.

In Corpus Christi, Terrence McNally's retelling of Jesus' life, the playwright's provocative spin on the tale -- setting it in 20th-century Texas and making its protagonist a gay man -- never obscures the Gospel story's essence or message of love, and as staged by Real Rain Productions, it succeeds in bringing us to this old, familiar story by a new path, through theatricality, modern idioms, irreverence, and a winning ensemble.

While the dirigo group should be applauded for the scope of The Gypsy Chain, this ensemble-developed project about Earth First! activist David "Gypsy" Chain, who was killed defending the forests of Northern California from illegal clear-cutting, the onstage effectiveness of the work falls short of its sociopolitical message, while Gypsy's personal story is lost in the muddied construction of a play that isn't sure exactly what it wants to be.
columns

QT5-inspired obsessive cinema dementia; our community suffers another blow with the loss of Mambo John Treanor

The people want to know: who, precisely, was Bruce Barton quoting?

"Public Notice" talks about friends and the end of this column.

The sand of trivia in your brain's Vaseline

Your Style Avatar takes you on a tour of two local, innovative businesses: Cush Cush and Big Red Sun.

The homey hospitality of the Panhandle's Hotel Turkey

My mother's menopause was tough on the whole family, but that was 22 years ago. I am only 36, and I hope there are better ways of dealing with menopause by now. Can I prepare for this time of my life?