A writer and his artist aunt explore cave paintings and see more than just writing on the wall.

No Water, Plenty of Sewage

Mostly local scuttlebutt, with trips to Cuba and Denver

A proposed bond package to lengthen roads draws support from business lobbyists but opposition from environmentalists and local Democrats.

Conflicts, corruption, charges of favoritism: When will that TDHCA ever get its act together?

Light rail is still full steam ahead, but with a new conductor.

Mayor what's-his-name is gone -- who's next?

Iced tea gets a makeover

Interesting culinary newsletters and the latest food news around town 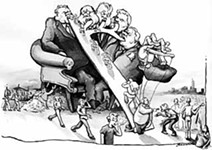 The world of online music after the fall of Napster.

It's Late But I Feel Early

Reference, Beyond the Blue

The Gospel According to Austin Vol. 2 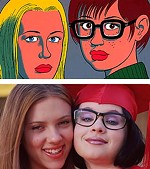 A Guy on a Mission

QTV will give Austinites another chance to experience Quentin Tarantino as a passionate educator.

With actor David Stahl currently appearing as the wicked Richard III and actor Katherine Catmull having recently played the evil Goneril in King Lear, the challenge of playing villains seemed a ripe topic to launch a series of artist-to-artist conversations on craft.

Nominations for the 2000-01 B. Iden Payne Awards for theatre excellence

Tornado in Slo Mo, the autobiographical album by Darcie Deaville, contains songs drawn from Deaville's tumultuous past that ring with a saving not-gonna-take-it-anymore grace, but her one-woman show at Hyde Park Theatre based on the same material falls way short of compelling.

In the new production of Shakespeare's Richard III staged by the Disciples of Melpomene, it's the crafty and well-crafted portrayal of Richard by David Stahl that drives this show -- a performance built around performances by a master actor on the stage of life.
columns

Public Notice asks not what it can do for its community but what *you* can. This week features part of our Austin-area Volunteer Opportunities List and informs of dear old "Public Notice"'s demise..

Happy Second Anniversary, After a Fashion! Follow along as Stephen has a great weekend talking "inner slut" with Lucinda Williams!

I am becoming concerned that my 12-year-old daughter is overweight. Is it too early to give her some pointers on how to lose weight?

Catholics vs. condoms, round two

Yanked back untimely from his idyll in the Rockies, Coach is sucked into the "debate" over college football's pre-season polls.