A profile of the Central Texas struggle over Alcoa Rockdale and its plans for expansionAlcoa announces new "voluntary" emissions reductions. 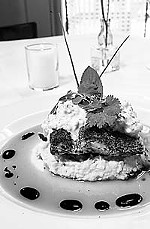 At Starlite, it's possible -- and exciting -- to belong to the Clean Plate Club, Rebecca Chastenet de Géry says.

Changing hands at Jean-Luc's French Bistro and other culinary news.

One More for Her

Dale Watson turns his grief into an album.

Jon Favreau and Vince Vaughn goof around and discuss the making of Made.

Mark Miks and Murder in Small Town X, festival season upon us, and pre-production on The Life of David Gale.

More grumbling about how dumb the Emmy Awards are

Fritz Lang's 1931 film M is remarkable for its modern editing and storytelling as well as for Lorre's bug-eyed performance as a serial killer preying on children.

The isolation of the lighthouse-bound old couple in Ionesco's The Chairs is supposed to be shattering, but while there are some startling images in the State Theater Company's polished and professional production, the terror of being alone takes a back seat to an effort to play the script's comedy.

Contemplating life, death, and the bell curve at the annual meeting of the Association of Alternative Newsweeklies in New Orleans.

Cool out for the summer with Meals on Wheels Air Conditioner Drive Fundraiser at the Dam View, some film, or an art's fest.

I've been hearing that fiber in the diet is not as important as we used to think. Is it really important, and if so what does it do?