Pride of the Yankees?

Evan Smith translates a New York pedigree into the editorship of Texas Monthly.

Mike Levy stays in the background as Texas Monthly's publisher, but takes center stage as a one-man activist group.

How did Texas Monthly's Paul Burka, a Democrat, end up becoming one of George W. Bush's biggest fans in the press corps?

Pissed On and Pissed Off

What is Star Canyon without its creator, Stephan Pyles?

As a birthday gift last week, my family and friends treated me to a plane ticket to Greensboro, NC, so I could attend a Southern Foodways Alliance field trip investigating the foods of the Carolina Piedmont. 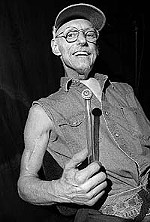 The ballad of Mambo John Treanor No Emmy nominations for Buffy

John Ford's Sergeant Rutledge, about the trial of a black Army officer accused of murder and rape, has a striking, formal sort of beauty.

Chuck & Buck is often disturbing, but remains watchable thanks to director Arteta's fine blend of urban horror and dark humor.

Lemmon plays a company man who tries to climb the corporate ladder by loaning out his bachelor pad to illicitly trysting higher-ups. As usual, office politics makes for some strange bedfellows in this comedy.

Burial Ground: The Nights of Terror

The Johns – Belushi and Landis – both achieved their first huge film success with this popular hit.

The Princess and the Warrior

Three years after leaving Austin for Hollywood, comics Chip Pope and Howard Kremer still aren't celebs, but with pilots for HBO and Comedy Central and a willingness to schmooze, they've come agonizingly close.

This is Our Youth

The characters in Kenneth Lonergan's This is Our Youth are coping with the fallout from having grown up in dysfunctional families and tangled in friendships that were often abusive reiterations of those families, and Saints and Poets Theatre bring them to pure, unfiltered life, every twitch and slouch, every blame and whine and burst of cheap violence.

The Vortex Summer Youth Theatre production of Edmond Rostand's Cyrano de Bergerac plays up the comic elements of the story, mostly to good effect, without ever losing touch with its romantic theatricality and verve.

The Will Rogers Follies

More than the life of Will Rogers, The Will Rogers Follies is about production values, singing, dancing -- entertainment with a capital "E" -- but with its poorly executed set, distracting costumes, problematic lighting and sound, the 43rd annual Zilker Summer Musical production is unable to deliver.
columns

We say goodbye to visionary writer and Chronicle co-founder Jeff Whittington, who passed away last week at the age of 46.

Stirred up by the arts, sounding off on local TV

Hey, lookee! More info on the Wizard of Oz Sing-Along and some lowdown on Meals on Wheels beat the heat program.

What's this we hear about a new studio next to the Continental Club, and what well-known out-of-towner is involved?

The data dump in your mind's vast landfill

My 3-year-old daughter likes to eat dog biscuits. I have been hiding them from her, but she occasionally finds them anyway and helps herself. Is there anything wrong with this?