Vision of a New Republic

Plans for the Revitalization of Republic Square

A Capsule History of Republic Square

The Art of Saving AMOA

Ecology Action workers strike in response to changes within the organization, including the firing of a customer service specialist who helped organize the company's union, implemented by its new executive director.

Local environmentalists and other activists begin discussing how to respond to the Navy's proposal to use land in South Texas as a bombing range.

Despite a recent chastening by the Texas Legislature, the scandal-plaguedTexas Department of Housing and Community Affairs is stonewalling on an open records request by a nonprofit developers' group.

The Flavors of Summer

Ah, summer, when the degree of heat and the languor of the hours seems to intensify the flavors and aromas of the bounteous foods available to us. As we do every summer, we requested the food staff to share memories of summer foods and received a delicious bounty in return.

A Bowl of Independence

My relationship with tomatoes is a passionate one.

Reissuing the Rosetta Stone of alt.countrypolitan

Antone's Anniversary off to a bumpy start, and the same goes for local CD outlets.

Another Side of This Life, The Lost Recordings 1965-1966, Sacred Hearts & Fallen Angels - The Gram Parsons Anthology

Demons and Angels: The Ultimate Collection

Morning Glory: The Tim Buckley Anthology, The Dream Belongs to Me

Glory B da Funk's on Me -- The Bootsy Collins Anthology

The Columbia Years, 1962-1968, Monk in Tokyo, Live at the Jazz Workshop Complete

British Steel, Point of Entry, Screaming for Vengeance, Defenders of the Faith

A Thang Between Two Wise Guys

Leon and Andy Stayed Up All Night to Make You Laugh

Filmmaker James Benning typifies the avant-garde tradition and will be on hand to present his film, Los, as part of the Austin Film Society's series, "Expanding Cinema: Fifty Years of Avant-Garde Cinema."

Structuralist, Collagist, and Surrealist Film: The Poetics of Avant-Garde Cinema

Cinemaker gets jiggy wit it.

Belinda Acosta argues why your trash TV is no better than her trash TV.

Midnight in the Garden of Good and Evil

Spacey is irresistibly sexy in this film adaptation of John Berendt's book Midnight in the Garden of Good and Evil; the film has an excellent cast and a certain charm, but suffers from a fatally flawed script.

An intelligent script and tightly realized tension eventually fizzle with an anticlimactic ending; still, Cause for Alarm is an interesting little "B" noir.

Final Fantasy: The Spirits Within

The Trumpet of the Swan 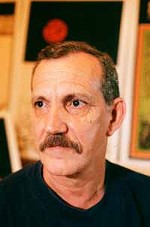 From 1961 to 1992, Julioeloy Mesa worked in the Cuban Institute of Cinematic Industry and Art, making movie posters that earned international awards, exhibitions in museums, and even a permanent collection in the Library of Congress. Though he now lives comfortably in Austin, Texas, Mesa's artistic struggle continues.

Arts companies are pulling in the green, playwright Dan Dietz is on the road again, and the stork delivers a couple of new artists.

Expanding on neighborhood expansion, taking C. Robison to task, and much more.

Church & State. As different as night / day, dog / cat, and chocolate / peanut butter. And in the U.S., supposedly as separate as oil / vinegar. What's really going on here?

Gives you more of what you want when what you had is all gone. Trivially speaking, that is.

Our Style Avatar discovers J-Rock at Momoko, just in time for their upcoming Summer Fashion Show.

Out of the blue my eight-month-old son has begun having seizures. We thought he was going to die, but thankfully, DilantinTM has stopped the seizures. What is causing this, and is there anything else I can do to control them?

The United Nations puts AIDS in the crosshairs.

The Masters and Wimbledon