A Legislative Wrap-Up on the 77th Session

Testimony concludes in the trial of Robert Springsteen IV, accused of taking part in the infamous "yogurt shop murders."

Austin freshman Ann Kitchen proves a quick study in her first session at the Texas House of Representatives.

The city gets into the affordable housing development business, buying land in East Austin for a mixed-use development there.

The aesthetic at Girasole speaks to the food fashion of our age, according to Chronicle writer Rachel Feit. It is studied, indeed, almost market-researched in its appropriateness.

Wines by the Glass 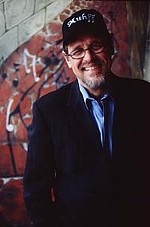 The WB finale of Buffy the Vampire Slayer, the series premiere of TNT's WitchBlade, and the series finale of Star Trek Voyager.

On the surface, Gold Diggers is fluffy musical fare with Busby Berkeley's delightfully surreal production numbers, but the Great Depression left its mark on the film.

My Cousin Vinny combines a good dose of Northeastern pomposity and Southern ignorance to produce a great comedy.

The King is Alive

This musical sucks you in with its own brand of willful illogic and breathtaking visuals. Set in turn-of-the-century Paris, a penniless poet falls madly in love with a nightclub's star performer, a chanteuse-cum-courtesan who has a heart of gold and is an incipient consumptive. The music is a combination of restructured modern pop tunes manhandled into clever new forms.

What's the Worst That Could Happen?

Got to Get Ourselves Back to the Garden

The exhibition "Charles Umlauf: A Retrospective, 1933-1992" at the gallery Spazio by Lytle Pressley, is a fresh reminder that Umlauf was an artistic virtuoso in many ways and not simply an artist who lived in Austin, but an artist who was Austin, who embodied something of the character of the city and revealed it in his artwork.

Central Texas writer Tom Grimes has a play date in L.A., Deborah Hay duets with Baryshnikov in Brooklyn, and Jouét flies off to Louisville, plus legislative applause for Austin musicals Jouét and Oliver!

Watching Rob Nash morph from character to character at cell-phone speed is like watching Alexander Nemov perfect a somersault after a double flip in an Olympic floorshow. In his new solo show, Sex Farce, Nash handily embodies 14 characters and umpteen sound effects aided only by a chair and an offstage voice, but an unwieldy frame loses Nash's latest a couple of points. The play begins and ends in 2066, which does nothing but make Nash's job harder.

In the Zachary Scott Theatre Center production of Terence McNally's Master Class, Lisa Bansavage is exceptional as Maria Callas. Whether bantering with the audience or berating her students, Bansavage is charming, funny, and imposing -- but then, she's La Divina.
columns

Our readers holding forth, but not holding back.

Two words for this week in "Public Notice": Pride and Ride. Okay.

Always avant Austin retailer By George's new store is alight with style; starting this week, SoCo stays up late on the First Thursday of every month.

Where to get tested for HIV and other STDs.

I don't know how much vitamin C I should take. The government has one figure and books I have read have others. Who is right?